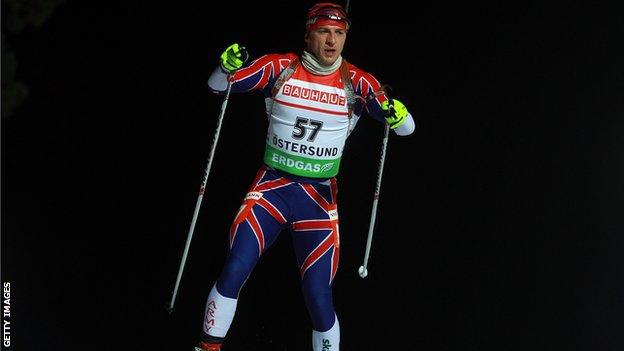 Biathlete Lee Jackson does not feel the same anticipation for Sochi 2014 that he did for his first Winter Olympics.

The 33-year-old from Stockton-on-Tees joined the British Army in 1999, and took up biathlon 18 months later thanks to

He then made his Olympic debut at the Vancouver Games four years ago.

"It's a different feeling because there isn't the same excitement as in 2010. But I'm more experienced, and probably more focused as a result," he said.

Unless a sponsor provides £50k, biathlon is over in Britain

Jackson finished outside 50th position in his three biathlon disciplines at his debut Olympics.

Since then, he has secured a top-20 placing in three world cup relay events, and an individual high of 49th.

As in Vancouver, at Sochi he will compete in the 20-kilometre race and 10-kilometre sprint.

A top-60 finish in the sprint would also secure a spot in the 12.5-kilometre 'pursuit' event.

"I've had a long, four-year cycle to build and now I feel better ready to cope with the pressures of such a big event," he explained.

"My preparation's been good and I feel I'm in the best physical shape I've ever been in."

After once being incorrectly entered as Lee-Steve Jackson, he is now often in results under that name. Some biathletes now call him 'Stevo'.

Sochi could be the last Winter Olympics in which Team GB has any biathletes as after the 2014 season the event's funding runs out.

Currently, the Army helps fund the British Biathlon Union but it has now withdrawn that support.

"Obviously I'm just concentrating on Sochi and this season, whilst being optimistic about the future," added Jackson.

"But the reality is, unless a sponsor steps in with £50k, we won't be able to continue with the sport in Britain."