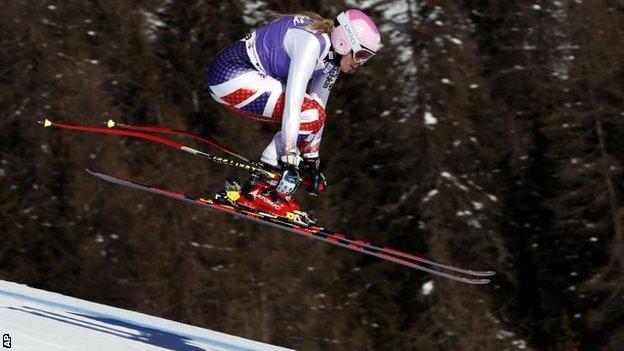 British skier Chemmy Alcott aims to repay the faith of Team GB selectors after being picked for the Sochi Olympics, which start on 7 February.

The 31-year-old was chosen despite failing to prove her fitness prior to Wednesday's squad announcement after five months out with a broken leg.

She was picked as one of 56 athletes to represent Great Britain at the Games.

"I'm glad they're taking this chance with me. And I'll prove them right because I'll ski fast," she said.

The Twickenham-born racer was 11th in both the 2006 downhill and the 2010 super-combined.

She was due to make her comeback in Italy last week, but poor weather saw the World Cup meeting cancelled, putting her place at the Games into doubt.

On Thursday, Alcott competed at the World Cup Super-G in Cortina d'Ampezzo, where she finished 42nd.

"Yesterday [Wednesday] was exactly five months after I broke my leg. The 22nd of the month is always emotional," she said.

"Yesterday, just before the start of the training run, I realised I must have made the team as I had like 100 texts. I was really ecstatic."