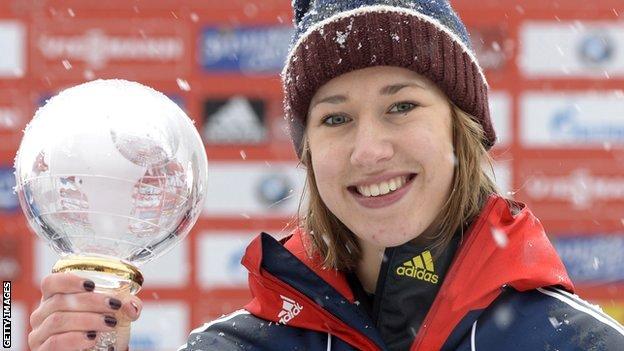 Lizzy Yarnold will go into the Winter Olympics on a high after winning the overall skeleton World Cup while fellow Briton Shelley Rudman finished third.

Yarnold came ninth at the last race in Germany with Noelle Pikus-Pace taking victory, but it was enough for Yarnold to win the title by 152 points.

Rudman took bronze in Konigssee to come third overall in the World Cup.

"It's something I dreamt of and I can't stop grinning from ear to ear."

Pikus-Pace won the first heat on Friday but the second was cancelled because of bad weather and Yarnold took the title.

The Briton had a 225-point lead over American Pikus-Pace going into Friday's race.

Each World Cup victory is worth 225 points, and with points awarded to the top 30 finishers, Bath-based Yarnold only had to complete the course in Germany to secure the title.

Despite finishing off the podium for the first time in the eight-race season Yarnold becomes the third British woman to win the World Cup title after team-mate Rudman, who won it in 2012, and Alex Coomber, who won three consecutive titles between 2000 and 2002.

"It takes a lot of energy to win," added Yarnold. "This week I took the opportunity to get a bit of rest ahead of Sochi and ahead of all the kitting out we've got next week back in the UK.

"To be as consistent as I have with seven podium finishes, which is a record, is a great achievement and then to win this crystal globe that I can keep for life is the best thing in my whole career - if Sochi goes well as well it will be absolutely perfect."

Yarnold and Rudman were recently predicted to win gold and silver in the skeleton at the Olympics, according to a statistical study.

World number one Yarnold suffered a major bump midway through her first run to finish 1.25 seconds behind Pikus-Pace, while Rudman finished exactly half a second behind the American as she took bronze.