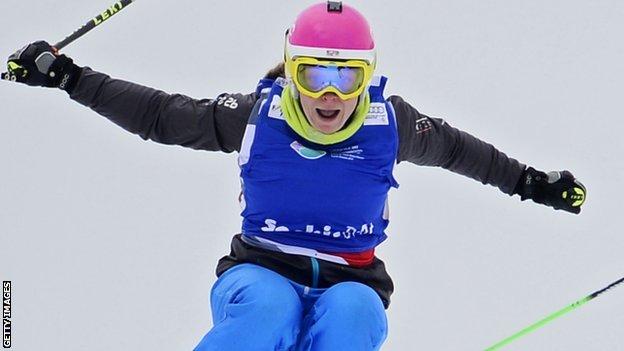 Ski cross racer Emily Sarsfield says the British Olympic Association "does not understand" the sport, contributing to her non-selection for Sochi 2014.

Three top-24 finishes in 2013-14 World Cup events and a world ranking no lower than 32nd were the criteria required.

Just because I'm British, I'm going to be watching an Olympic ski-cross containing five or six athletes ranked lower than me

With some of the top 32 ineligible to compete, 34th-ranked Sarsfield was invited but the BOA did not select her.

"It's very frustrating when there's no-one with ski cross knowledge within the selection process," said Sarsfield.

"There is no salaried ski cross coach in Britain which means the people making decisions don't fully understand the sport and how it works."

Olympic ski cross is one of the six events that come under the banner of freestyle skiing.

To compete in the Winter Games, an athlete must be invited by the International Ski Federation, with letters only sent to those ranked in world's top 32.

But across the six disciplines, any one country can have a maximum of 26 competitors.

As a result, Sarsfield was not initially invited, but received a letter several days later.

What is Olympic ski cross?

A BOA statement read: "The agreement between the BOA and British Ski and Snowboard Association does not allow for the acceptance of 'hand-back' places.

"Given the investment that has gone into winter sport in the UK, it is expected that every athlete who competes for Team GB is in a position to deliver a credible performance."

Sarsfield missed out on the Vancouver Games four years ago after tearing knee ligaments and fracturing a femur and tibia during her race.

But the 30-year-old from Durham fought back to fitness in time, only to be pipped to selection by Australian-born Sarah Sauvey.

This year, Team GB will have no representative in the event.

"Obviously, I'm absolutely devastated," Sarsfield, who has abandoned a legal case and instead opted for an online petition, told BBC Radio 5 live.

"To actually be invited, having met the necessary criteria to be so, but not be chosen at the last hurdle turned is very hard to take.

"Now, I'm going to be watching an Olympic ski-cross with five or six athletes ranked lower than me competing, just because I'm British."