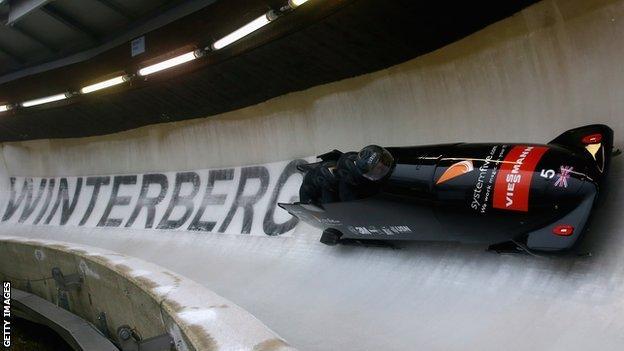 Great Britain's four-man bobsleigh team rounded off their Winter Olympics preparations with a silver medal at the European Championships in Germany.

Britain's last European four-man podium was in 1994, when they also won silver.

USA won the race in a combined time of one minute 38.54 seconds, with Switzerland second and Canada claiming third.

Britain's time of 1.38.85 was just 0.01 seconds slower than that recorded by the Canadians.

"It's a great result to send us to Sochi," said GB Bobsleigh performance director Gary Anderson, speaking to BBC Sport. "There is still much more to come from this crew."

Anderson continued: "We made subtle changes in technology that we will look at and analyse the impact of ahead of the Games."

It is the second historic result for the team in as many months after they secured World Cup silver in Lake Placid in December.

Pilot Jackson ruptured his Achilles in July and astounded medical experts by returning to competition for the season-opening World Cup in November.

However, his form has been mixed heading into the Sochi Games.

He missed out on qualifying the two-man sled for the Olympics, but Anderson is pleased that his lead pilot will now have more time to prepare and focus on the four-man competition, which offers the best chance of success.

The Sochi Winter Olympics begin on 7 February in Russia.