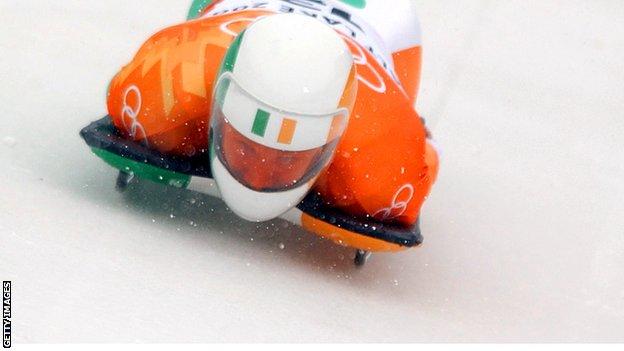 Canadian-born Sean Greenwood will be continuing one of Ireland's more unlikely sporting traditions when he competes in the skeleton event at next month's Winter Olympics.

The 26-year-old will become the fourth consecutive men's skeleton athlete to represent Ireland at a Winter Games in a run famously started by Clifton Wrottesley in Salt Lake City in 2002.

Wrottesley - full name Baron Clifton Hugh Lancelot de Verdon Wrottesley - claimed an unexpected fourth-place finish, missing out on a medal by less than half a second, in a performance that remains easily the high point of Ireland's Winter Olympic history.

Part of a likely five-strong Ireland team for Sochi, Greenwood cannot afford to set his sights so high but believes Wrottesley's achievement still stands as an indicator that smaller nations need never completely write off their chances of Winter Games success.

"I got to know Clifton when I was accepted onto the Ireland programme and he has been a huge inspiration for me," says Greenwood.

"In terms of athletes from the so-called smaller nations I don't think anyone can surpass what he has achieved, and he remains a huge motivation for everyone on the team."

Greenwood was born in Vancouver to an Irish mother and always retained a strong bond with her homeland, returning to spend many childhood summers with her in her native Galway.

Growing up in Calgary, 10 minutes away from the 1988 Olympic track which yielded another seminal 'lesser nation' feat in the form of the original Jamaican bobsleigh team, Greenwood was persuaded to try his hand at skeleton after watching the sport on television.

"I was midway through my university degree and although I was a rugby player I was beginning to realise it was no fun playing rugby in temperatures of 20 below zero," adds Greenwood.

"I gave it a go and I was addicted straight away. I made up my mind that I wanted to represent Ireland so I could keep my bond with the country as strong as ever.

"After five years of working and training full-time, I managed to get onto the Ireland team."

In common with many athletes from smaller nations, Greenwood has become a virtual one-man band on the international circuit, where he has competed on both the World Cup and Intercontinental Cup circuits in order to gain enough qualifying points for Sochi.

"I have had to self-finance the dream by taking a succession of jobs and working in the summer, but with my family's help and with a bit of sponsorship and selling merchandise online, I have managed to get there," added Greenwood.

"I'm hoping for a top 10 finish if everything goes well but it is about being there and representing my country and continuing the tradition that started with Clifton and went on through David Connolly and Pat Shannon.

"I will be part of a small team in Sochi but all of us are looking forward to representing Ireland and we will be proud to do so."