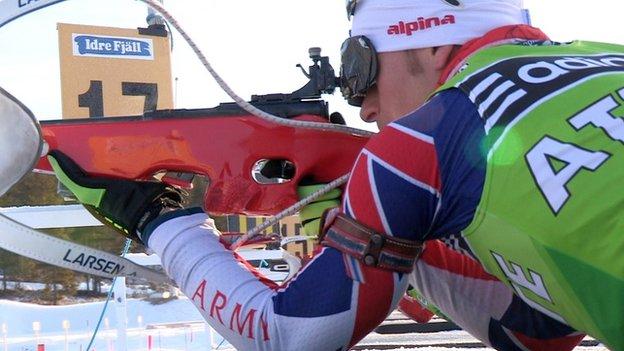 The future of British biathlon beyond Sochi 2014 has been guaranteed after a new sponsor for the sport was found.

The deal with a Birmingham healthcare supplier is worth £250,000 over four years, enough to ensure continued support for GB at international level.

"Just three months ago, it really did look as though Sochi would be the last Olympics for our biathletes," said the British Biathlon Union's Andre Oszmann.

"Now we have a real chance to develop the sport in the UK."

The financial commitment from Aspen Healthcare Solutions exceeds the £200,000 figure the team had said was necessary for survival beyond next month's Olympics, where Lee Jackson and Amanda Lightfoot will compete for Great Britain.

All but one of the British senior team come from the military. Their continued participation in the sport's top events - World Cups, the World Championships and the Games - had been in jeopardy as the British Army cut its contribution.

"The reality is, unless a sponsor steps in, we won't be able to continue with the sport in Britain," Jackson had said earlier in January, before the deal was announced.

"We are already looking forward to the 2018 Winter Olympics in Pyeongchang, Korea," said BBU chairman Oszmann.