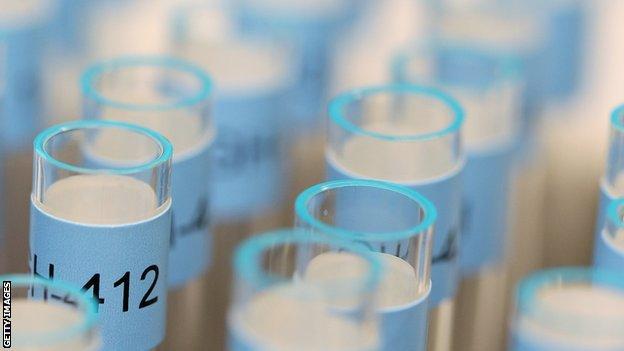 "We don't seem to be rife with match-fixing and illegal betting but doping is a problem," Reedie told BBC Radio.

"I think we can win battles, I question whether we can ever win the war. But the more battles we win, hopefully the more people we will discourage."

The International Olympic Committee said on Sunday that Sochi 2014 will have the "most stringent anti-doping programme" seen at a Winter Olympics.

That announcement came three days after Russian biathlete Irina Starykh pulled out of the Games after a positive test.

And Reedie, who began his role last month, hopes enhanced testing procedures will deter athletes from contemplating the use of illegal substances.

"There has been a pretty wide-ranging unannounced pre-competition testing programme, and I suspect that is the one that has caught the Russian biathlete," he told the BBC's Dan Walker.

Athletes' samples will be kept after the Games should technology further improve and allow for future testing.

"Sometime over the next eight years they will be looking at selected samples as science and technology gets better, so athletes who think they can get away with it now may not get away with it in the future," said Reedie.

"I wish it didn't happen but it is the world in which we live. It is, I think, the biggest threat facing Olympic sport."

He added: "It has to be an element of deterrence by testing. There also has to be a very significant effort of education, and philosophically we have to get all of the athletes to understand we are in business to protect the clean athletes."

The Sochi 2014 opening ceremony takes place on 7 February, with the first events taking place the day before.