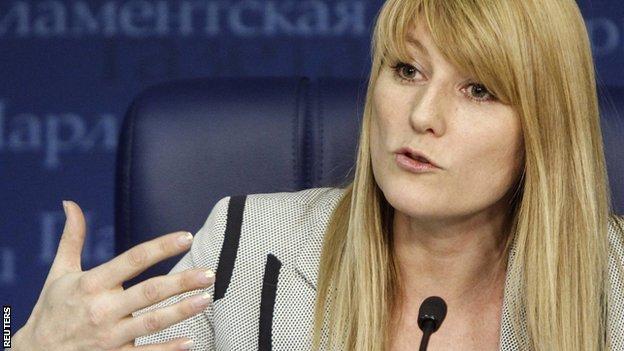 Former speed skating gold medallist Svetlana Zhurova says the Winter Olympics should not be used as a platform to protest about gay rights.

"For the spectators, it is more important who wins than whether [they are] homosexual or not," she said.

Zhurova, who won Olympic 500m gold in 2006, is bemused by the attention that Russia's anti-gay laws have attracted.

The laws allow the authorities to issue fines for providing information about homosexuality to people under 18.

Critics say the amendment's loose wording and its free interpretation by the authorities effectively make any kind of public gay rights event in Russia impossible.

They also argue the new laws are part of an environment of persecution that gay people often encounter in Russia.

But Zhurova believes those wishing to make a stand should not target the Games.

"We are all participants of the Games and we are going to applaud the straight people and the homosexuals just like the previous Olympic Games," she said.

"We would root for any athlete. I'm sure there will be no problems."

Separately, the organisers of the Sochi Games have apologised for ongoing issues with a number of hotel rooms.

Thomas Bach, president of the International Olympic Committee, confirmed on Monday that around 700 hotel rooms - some 3% of the overall total - were not yet finished.

Asked by BBC Sport for an update on the the situation, Aleksandra Kosterina, Sochi 2014's head of communications, said the figure was declining every day and that "all of the media hotels are open".

"We apologise for any inconvenience," Kosterina added. "We're dealing with it, we're on it and we apologise."