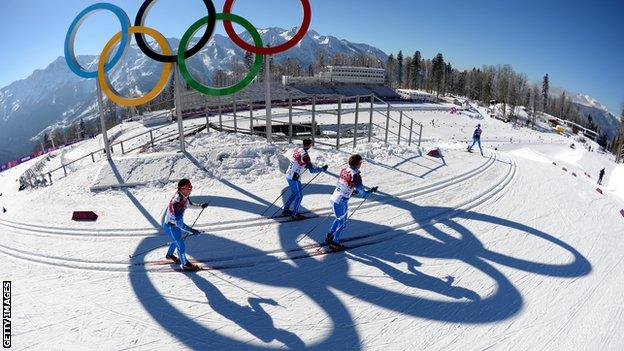 The 2014 Winter Olympics, which have cost £30bn to stage, start in Sochi in Russia on Thursday with Great British athletes competing in snowboard slopestyle and figure skating.

It is the first time in 30 years that events are getting under way before the opening ceremony, which will take place at the Fisht stadium on the newly-built Olympic Park on Friday.

There will be 98 gold medals won over 16 days of competition, with 2,871 athletes from 87 National Olympic Committees competing, seven of which - Dominica, Zimbabwe, Malta, Paraguay, Togo, Tonga and East Timor - are entering for the first time.

The organising committee has been working 24 hours a day to get all the venues ready for competition, while there have been problems with hotels being finished in the mountain cluster and controversy over the culling of stray dogs.

A spokesman for the International Olympic Committee says up to 44 heads of state are expected to attend, believing the figure shows the Games have been given an "international seal of approval."

Great Britain are hoping for their most successful Winter Games, with a UK Sport medal target of between three and seven podium finishes. Britain's most successful haul was in 1924 when they won four medals.

British hopes Billy Morgan and Jamie Nicholls start their bids to qualify for the slopestyle finals, which is making its Winter Olympics debut, at 06:00 GMT before triple X Games gold medallist Jenny Jones and Aimee Fuller do likewise in the women's event from 10:00 GMT.

It's probably the biggest and most exciting slopestyle course in history. I think it's going to go down with a bang

You can watch their progress live on the BBC Red Button, BBC Sport website, Connected TVs, mobiles and tablets.

The Olympic course at the Rosa Khutor Extreme Park has had to be modified over the last couple of days after competitors, including two-time halfpipe gold medallist Shaun White, complained it was too dangerous during training after the Norwegian, Torstein Horgmo, broke his collarbone.

American White subsequently withdrew from the slopestyle event on Wednesday, a day before the Games get under way.

"After much deliberation with my team, I have made the decision to focus solely on trying to bring home the third straight gold medal in halfpipe for Team USA," White said. "The difficult decision to forego slopestyle is not one I take lightly as I know how much effort everyone has put into holding the event for the first time in Olympic history, a history I had planned on being part of."

Fuller, who finished fifth at the last World Cup meeting before the Olympics and competed at the X Games, cannot wait for the event, where riders perform a series of tricks on rails and jumps, to start.

"It's probably the biggest and most exciting slopestyle course in history. I think it's going to go down with a bang. It's big," she said.

"The small kickers are still very big. It will split the girls, but I will hit the big line and try to be smooth and clean."

There will be two heats in both the men's and women's slopestyle, with the top three in each going straight through to the final. The next six in each heat qualify for the semi-finals on Saturday.

The figure skating team event is another new addition to the Olympic schedule, with the short programme for the men and pairs at 15:30 GMT on Thursday. The 10 competing teams, including Great Britain, will have one entry in each of the four disciplines.

Matthew Parr, 23, will represent Britain in the men's short programme at the Iceberg, while Stacey Kemp and David King will compete in the pairs.

The three-time national champion said: "It's quite cool and a thing to look back on to say you were the first skater ever in the team event at the Olympics.

"I guess I'm more proud of representing my country. From the days as a small kid skating, it's something you always want to achieve. The Olympic Games is the pinnacle for any amateur athlete."

There is also women's moguls qualification, as sisters Justine, Chloe and Maxine Dufour-Lapointe all compete for Canada.

American Hannah Kearney, Olympic champion in Vancouver, said: "I know everyone wants to beat me even more. There's no place to go at the top, but to fall or stay there."