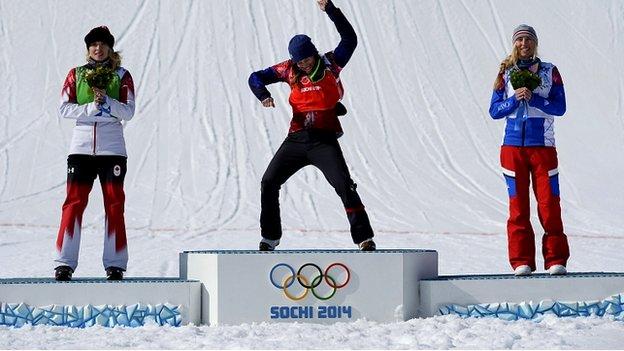 Eva Samkova of the Czech Republic put on a masterclass to win gold in the women's snowboard cross event.

The 20-year-old was the top qualifier and won her quarter-final and semi-final in dominant fashion before doing the same in the final.

Great Britain's Zoe Gillings missed out on a place in the final after narrowly finishing fourth in her semi-final.

The 28-year-old from the Isle of Man was edged out by Italy's Michela Moiolo in a photo finish and ended the competition ninth overall, one place below her position at the Vancouver Games four years ago.

"I was hopeful [of making it through to the final] but I knew the Italian was right behind me and I just tried to ping it over the last jump and tuck in as much as I could," she said.

"The wait for the decision was agony. It didn't go my way, but that's boarder cross for you."

This year is the first time the event has featured six snowboarders competing against one another, with the event having featuring four competitors at the two previous Games.

It is a big course, but I wouldn't have expected anything less and it was fun to race on

Earlier, two of the first six competitors in the individual time trial, USA's Jacqueline Hernandez and Helene Olafsen of Norway, were both taken off the course on stretchers after failing to complete their runs in the early individual time-trial.

"I'm surprised that 24 girls made it through to the racing today because we had some really big falls in training this week," added Gillings

"It is a big course, but I wouldn't have expected anything less and it was fun to race on."

Her coach and fiance Dan Brier says he expects the snowboarder to continue in the sport through to the next Olympics - which would be her fourth Games - in Pyeongchang, South Korea.

"There is no way she will be content with that today," he told BBC Sport.

"Zoe went out there convinced she could win a medal. It didn't quite happen for her but she'll be back for more.

Gillings added: "I'll be 32 in Korea and that's a good age for someone in my sport so I'm confident if I get the funding support I need that I can be there challenging in four years' time."