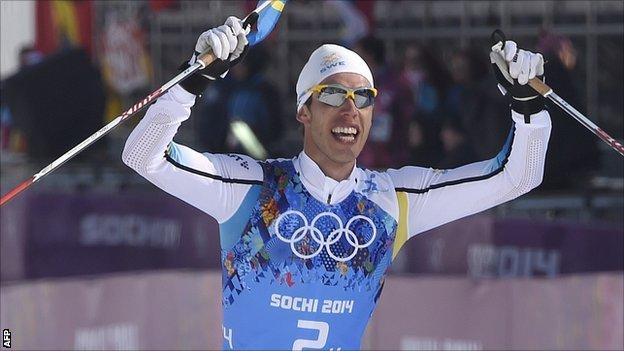 Their quartet of Marcus Hellner, Lars Nelson, Johan Olsson and Daniel Richardson led from start to finish and completed the course in one hour 28 minutes 42 seconds.

The battle for silver and bronze was won by Russia - who were watched by President Vladimir Putin.

The bronze was taken by France - their first medal in the event.

A day after their women's team came from behind to earn a narrow relay victory, Sweden's anchor Hellner skied alone for the entire fourth leg and grabbed a Swedish flag to wave as he entered the stadium and proceeded unchallenged down the final straight.

Hellner started the final leg with a 14-second lead over Russia's Maxim Vylegzhanin and quickly extended the gap, eventually winning by 27.3 seconds.

It was another disappointing day for Norway, who had fallen a minute behind by the second exchange and ended up fourth, a day after their heavily favoured women also failed to get a medal.