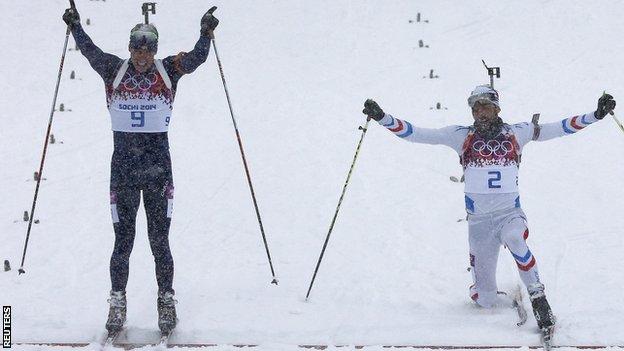 The pair broke away on the last lap and 28-year-old Svendsen finally moved clear 150m from home.

However, Fourcade, 25, recovered and finished the faster only to be denied in a photo finish with both recording a time of 42 minutes 29.1 seconds.

Svendsen's team-mate Ole Einar Bjoerndalen, 40, who is chasing a record 13th Winter Olympic medal, will have to wait until the mixed and men's relays after coming 22nd following a nightmare four missed targets on his final standing shoot.

Svendsen and Fourcade had also fought out a tremendous finish in the 12.5km pursuit at last year's World Championships in the Czech Republic with the Norwegian athlete winning by just 0.1 seconds.

Tuesday's race was postponed twice earlier in the week because of bad weather at the Laura Cross-Country Ski and Biathlon Centre in Sochi.