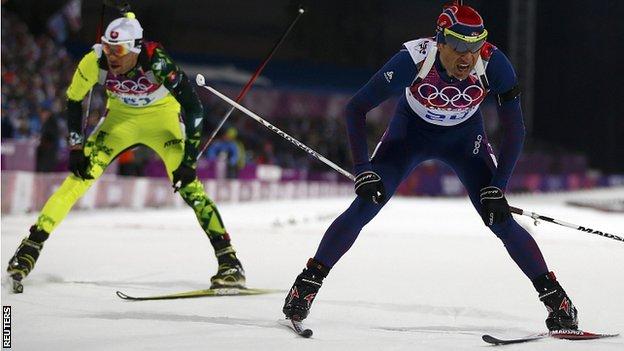 Norway's Ole Einar Bjoerndalen equalled the record for most medals won at the Winter Olympics as the 22nd Games got under way in Sochi, Russia.

Life is too short to give up... this is one of my most important victories

US snowboarder Sage Kotsenburg earlier won the first gold of the Sochi Games, with Britain's Jamie Nicholls and Billy Morgan missing out on medals.

Norway lead the medal table with two golds, a silver and a bronze.

After early qualifying for some events took place on Thursday, and a spectacular opening ceremony on Friday, the first five gold medals of the Games were up for grabs on Saturday.

Bjoerndalen finished ahead of Austria's Dominik Landertinger and Czech biathlete Jaroslav Soukup to claim the seventh Olympic gold medal of his career.

"This victory has been a four-year job and it has been many years since I won (an individual gold medal), but life is too short to give up," said Bjoerndalen.

"I think this is one of my most important victories."

The Norwegian will get the chance to break Daehlie's record in the men's pursuit on Monday, but he played down comparisons between the pair.

"It's difficult to compare us at this time because Bjorn was some years ago and now we have a lot more disciplines," he said.

"Bjorn did not have as many chances to win, so for me Bjorn is and always will be the biggest athlete ever in Norway."

Marit Bjoergen, known as the 'Iron Lady', became Norway's most successful female Olympian as she won her fourth Olympic gold medal in the 15km skiathlon.

"One gold was my goal, so now I can relax a little bit," said Bjoergen, who won three golds in Vancouver four years ago. "I think anything is possible."

While the Norwegians were dominating the opening day's skiing events, it was the Netherlands who were in charge of the speed skating at the Adler Arena.

Sven Kramer's time of six minutes 10.76 seconds was a new Olympic record as he finished ahead of compatriots Jan Blokhuijsen and Jorrit Bergsma to retain his 5,000m title.

"I was the only guy who could lose this race," said Kramer. "I really felt that pressure. I have won so many 5,000m, everyone expected me to win this race."

Kotsenburg was the first athlete to climb to the top of a podium after he won the first-ever Olympic slopestyle gold medal.

For Britain, Nicholls was in silver medal position after the first of two rounds but finished sixth, with team-mate Morgan in 10th.

The fifth and final gold medal of day one went to Canada's Justine Dufour-Lapointe, who edged out her sister Chloe to win the women's moguls.

"If you are not totally focused and paying attention, this course can kill you," said the 36-year-old American ahead of Sunday's men's downhill at 07:00 GMT,