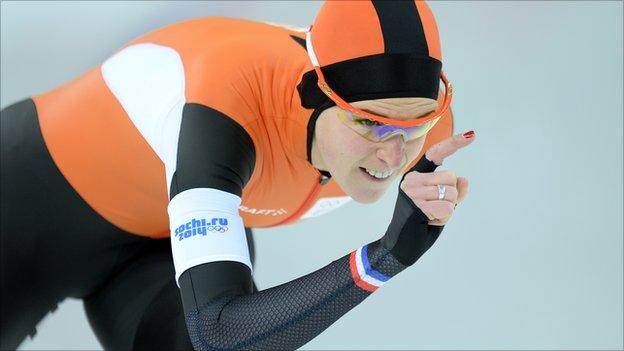 Irene Wust continued the Netherlands domination in speed skating at Sochi 2014 by winning the women's 3,000m.

The 27-year-old reclaimed the title she won in Turin in 2006, recording a time of four minutes, 0.34 seconds to beat defending champion Martina Sablikova.

Russia also claimed their first medal of the Games with Olga Graf skating a lifetime best to win bronze.

The Dutch men took a clean sweep of the medals in Saturday's first race of the Olympics, the 5,000m.

Sven Kramer won gold in that event, ahead of Jan Blokhuijsen and Jorrit Bergsma.

Wust, who also won 1,500m gold in Vancouver four years ago and gold in the 3000m in Turin, is the Netherlands most successful female speed skater.

"I have won three times in a row, I can't believe it," said Wust.

"It is unbelievable and it is also a big relief. I have never felt this much pressure. I was not the only one who wanted to win, 17 million Dutchies wanted the same,"