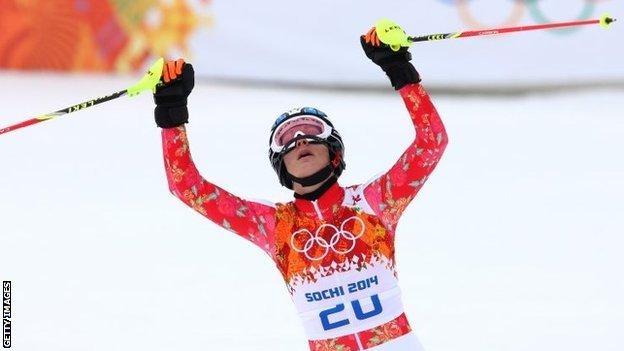 The 29-year-old was fifth after the downhill section, but shone in the slalom to clock an aggregate time of two minutes 34.62 seconds.

Britain's Chemmy Alcott was 16th after the downhill but withdrew as expected before the slalom section.

Alcott, who has battled back from a number of injuries to compete in Sochi, had said before the event she would use the downhill run as a training run ahead of the remainder of her campaign.

Mancuso had led by 0.47secs after the downhill ahead of Switzerland's Lara Gut but Hoefl-Riesch, who is also the defending Olympic slalom champion, proved too strong.

The German stood in the snow at the finish area to watch Mancuso's run and let her skis fall to the ground after seeing her rival's time flash up on the giant screen. She turned to face fans in the grandstand, placed her hands to her head then kneeled on the snow.

The win sees her match Janica Kostelic in winning two straight combined titles after the Croatian won gold in the traditional version, which includes two slalom runs, in 2002 and 2006.