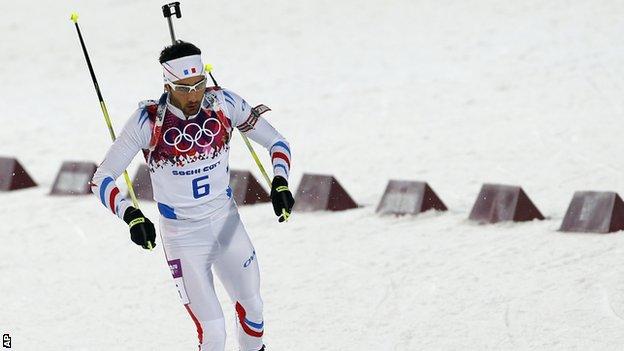 Frenchman Fourcade clocked a time of 33 minutes 48.6 seconds to finish 14.1secs ahead of his nearest rival in Sochi.

Bjoerndalen of Norway missed a historic 13th medal, finishing fourth, but gets another chance in the men's relay.

The 40-year-old finished just under two seconds off Beatrix, as he failed to build on the gold-medal success in Saturday's biathlon 10km sprint that saw him draw level with compatriot Bjoern Daehlie in the all-time winners' list.

For overall World Cup leader Fourcade, his almost perfect performance with the rifle and impressive display on the skis saw him claim his nation's first gold at Sochi and improve on the mass-start silver he won in the Vancouver Games four years ago.

"It is just great, there were a lot of expectations. I wanted this for so much, I had been thinking about if for four years," he told French TV France 2.

"I am also happy for the French Olympic team. Now it's up to the others to keep the ball rolling - there was not much that could happen to me today, it was just one of those days."

Britain's Lee Jackson had earlier failed to qualify for the pursuit after finishing 67th in the sprint.