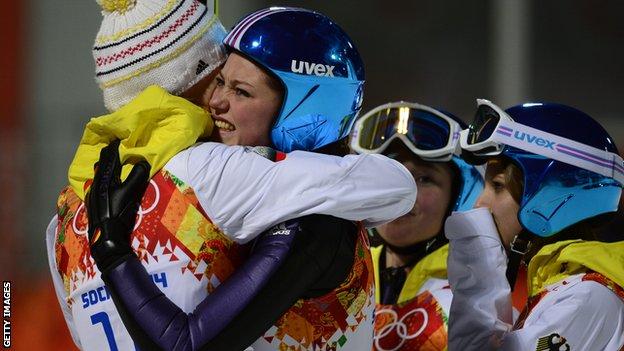 On a landmark night for the sport after years of struggle to have it included in the Games, Vogt, held on to beat Austria's Daniela Iraschko-Stolz, with France's Carina Mattel third in Sochi.

"It has been a fitting occasion after all the work that has gone on over so many years into getting this event on here.

"Thousands of women watching this around the world will be inspired to follow in their footsteps. Surely, this will be a permanent fixture in the future of the Winter Olympics. What a night to remember here in the mountains above Sochi. It's a privilege to have been here watching."

However, she was edged into fourth by 22-year-old Vogt's final jump.

American Sarah Hendrickson, 19, the world champion, could only come 21st but she was still recovering from a torn anterior cruciate ligament she suffered in August.

However, she did have the honour of becoming the first women to ski jump at a Winter Olympics.

"It's an amazing feeling to be the first one to jump in the first women's ski jumping competition at the Olympics," said Hendrickson. "My performance was not the best, but I kind of expected it."

Vogt jumped 103m with her first leap and, with the style marks added up, led after each of the first 30 competitors had gone.

She managed 97.5m with her second jump but her aggregate score of 247.4 was enough to edge out 2011 world champion Iraschko-Stolz, 30, who ended with 246.2 after climbing from fifth after the first round.

"I was confident and I was very, very stressed," admitted Mattel. "I felt sick but I knew I could do it. It means a lot as it's the first bronze in history."

Takanashi, who has won 10 of the 13 World Cup events this season, placed third after the first round but her second jump of 98.5m was not enough to climb higher.

And she admitted to being "disappointed" after the event.

"I couldn't jump the way I wanted on both attempts," said Takanashi.

It's been a really long journey. I've been ski jumping for 22 years and I've always wanted to go to the Olympics

"In Japan, the jumps are different. I came here wanting to do my best. I'm incredibly disappointed. It's a good experience being at the Olympics and I'm glad to be a part of it."

Women's ski jumping has been around for more than 150 years but the International Olympic Committee was reluctant to include it in the Winter Games.

Reasons given were numerous, including that the sport was too dangerous, that it could be harmful to women's health - particularly the reproductive organs - and that there were too few competitors.

Former Olympic boss Jacques Rogge said his organisation "did not want the medals to be diluted and watered down".

But with women making demonstration jumps and acting as forerunners in men's competitions, the sport was granted its own world championships in 2009 and World Cup in 2011.

And after several lawsuits, the IOC relented and agreed to include women's ski jumping for the Sochi Games.

American Lindsey Van, 29, who finished 15th in Sochi, was one of the driving forces behind the emancipation of women's ski jumping.

"It's overwhelming, I can't put it into words," Van told BBC Sport. "It's been a really long journey. I've been ski jumping for 22 years and I've always wanted to go to the Olympics."