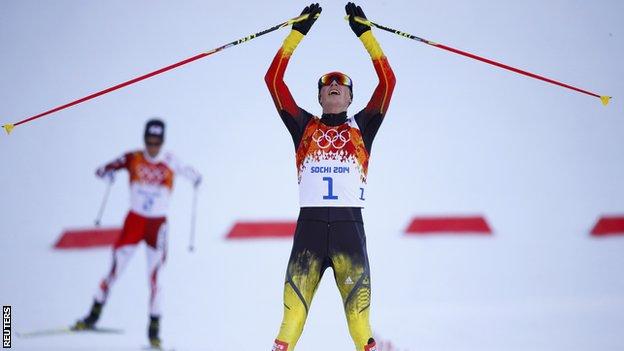 Frenzel, 25, held a six-second advantage after the ski jump phase before the 10km cross country race.

He won a team bronze in Vancouver 2010, but took individual gold on Wednesday after holding off a challenge from Japan's Akito Watabe, who took silver.

Nordic combined is one of six sports to have featured in every Winter Olympics since the first Games in Chamonix in France in 1924.

Frenchman Jason Lamy Chappuis took the gold medal in Vancouver but could only finish 35th in Russia.

Watabe, 25, was ahead with 2km of the race remaining, before the German regained the lead to win by 4.2 seconds, although the Japanese competitor managed to secure his country's first medal in this event since 1994.

Krog, 26, had a disappointing ski jump competition where he came 20th, meaning he started 63 seconds behind Frenzel, but raced well to take the bronze medal.