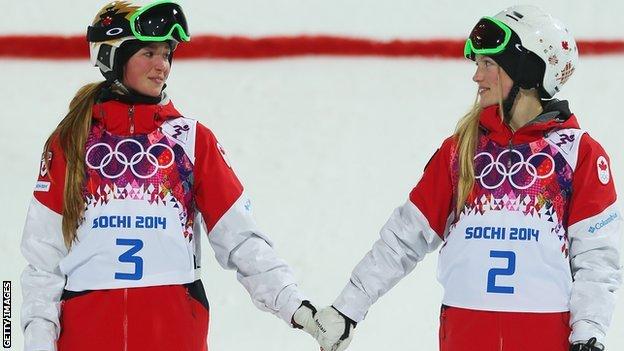 Hopes of a family podium sweep were ended after Justine and Chloe's sister Maxime failed to make the final phase.

Defending champion Hannah Kearney from the United States won bronze after a disappointing performance in the final run of the competition.

Japan's Aiko Uemura was beaten into fourth for the second successive Games.

Justine, 19, went through a technically precise final run to score 22.44 points with her 22-year-old sister following with a solid run but coming up .78 points short of the winning score.

They were just the third pair of sisters to win gold and silver in the same event at a Winter Olympics. The others were Christine and Marielle Goitschel of France in 1964 and Doris and Angelika Neuner of Austria in 1992

"It's the best feeling, they did it! They did it!" shouted the sisters' watching father Yves.

Kearney scored 21.49 in what is set to be her final Winter Olympics.