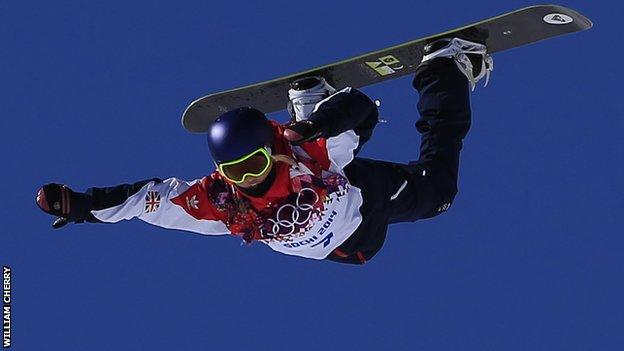 Bangor-based Aimee Fuller has missed out on an automatic place in Sunday's final of the snowboard slopestyle event at the Winter Olympics in Sochi.

The 22-year-old recorded a best score of 44.50 in the first of her two qualifying runs to finish 10th in her 12-person heat on Thursday morning.

Fuller will have another chance to qualify from the semi-finals which take place before the final on Sunday.

She is part of a 56-strong Great Britain team competing in Russia.

"I definitely didn't get down what I wanted to get down so I'm a little disappointed there, but I just see it as a good building block for Sunday's semi-finals," said Aimee.

"I'm not really going to think about it too much. I'm just going to go up there and do the best run I can possibly do on Sunday and we'll see what happens.

"It's slopestyle and anything can happen, the jumps are big so we'll see."

Fuller secured late qualification for the Games by finishing 11th and fifth in the last two World Cup events prior to selection.

The County Down girl, who grew up in England but now lives in Holywood, was 11th in Colorado before finishing an impressive fifth in Canada.

Those results left her eighth in the overall World Cup standings for the slopestyle class, where riders head down a course which includes rails, kickers and jumps.

Coleraine figure skater Jenna McCorkell will also compete for GB at the Olympics.