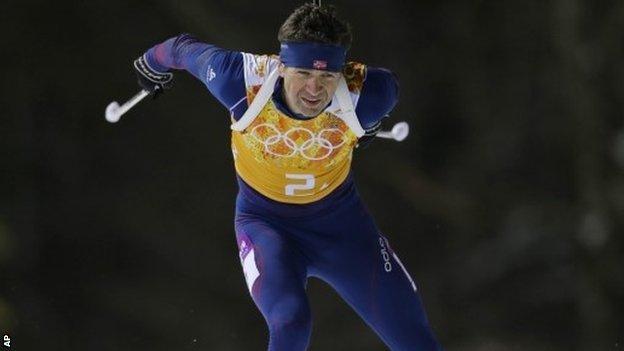 Ole Einar Bjoerndalen became the most decorated Winter Olympian in history with 13 medals by helping Norway win gold in the mixed biathlon relay.

It was the 40-year-old's second gold medal in Sochi and his eighth in his sixth Games.

Bjoerndalen handed a 43-second lead to Emil Hegle Svendsen, who crossed the line 32 seconds ahead of Czech Republic, with Italy taking bronze.

He had jointly held the medals record with compatriot Bjorn Daehlie.

Bjoerndalen, who also claimed the 10km sprint gold in Sochi, started his haul at the Nagano Games in 1998, and has won at least two medals at every Olympics since then.

Most medals won by Winter Olympians