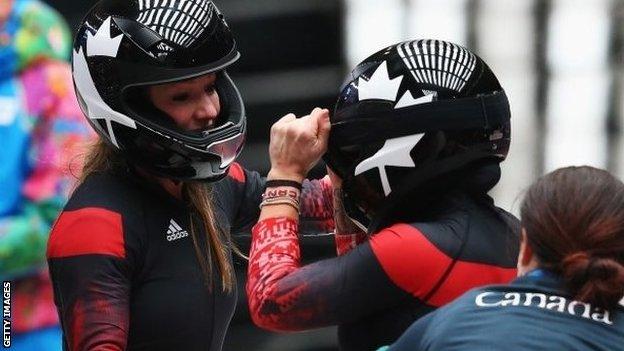 Humphries and Moyse finished in a combined time of three minutes 50.61 seconds to claim Canada's fifth gold medal of the Sochi Winter Olympics.

"We never lost belief and I drove as hard as I could," Humphries told BBC Sport.

Moyse added: "To win in our home country [at the 2010 Vancouver Olympics] four years ago was incredible, but to retain the gold medal is just an amazing feeling."

Former sprinter Williams won 4x100m Olympic relay gold at the London 2012 and would have become the first woman in history to claim gold at both a Summer and Winter Olympics.

However, she was pleased just to finish on the podium - the fifth person to achieve that honour at both forms of the Olympics.

"I didn't even know that until now, but it makes me really proud," she told BBC Sport.

"I'm not sure what the future holds for me, but it will start with pizza tonight."

British pair Walker and Wilson had been set a target of a top-eight finish and were disappointed not to be able to deliver on a track they struggled with throughout the event.

"It didn't work out for us here and we're gutted about that but we're super-committed and will come back stronger."

The next and final bobsleigh event of the Winter Olympics is the men's four-man competition which begins on Saturday at 16:30 GMT.