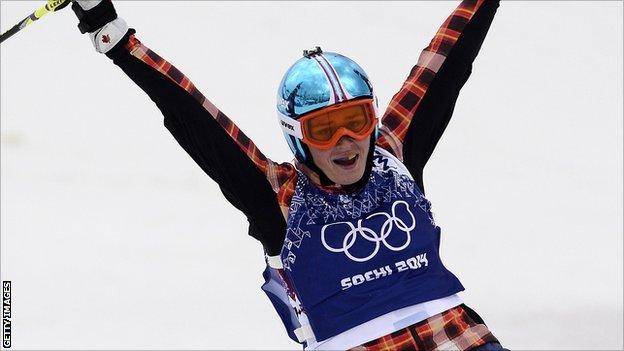 Canada's Marielle Thompson held off team-mate Kelsey Serwa to win gold in the women's ski cross at a damp and drizzly Rosa Khutor.

French veteran Ophelie David, 37, fell midway through the four-woman final to miss out on a medal.

World champion Fanny Smith of Switzerland only made it as far as the small final, placing eighth.

Thompson backed up the form that has yielded two World Cup wins this season with a strong performance over the challenging Sochi course.

The world championship runner-up hit the front early and she and Serwa, who was fifth in Vancouver and won the Olympic test event here, stretched clear of the other two.

David went down at the back of the field leaving the first three to coast home.

Germany's Anna Woerner and Canada's Stephanie Joffroy were both taken off the mountain in stretchers with leg injuries sustained in separate crashes in earlier rounds.