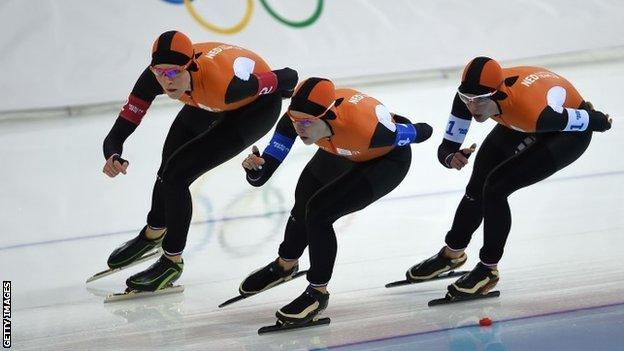 Netherlands's women continued their speed-skating dominance by setting a new Olympic record in completing a team pursuit double in Sochi.

It means the Dutch end the competition with 23 medals, including eight golds.

Wust's victory followed her success in the 3,000m and her silver medals in the 1,000m, 1500m and 5,000m and saw her surpass the three golds and a bronze won by Russian short-track speed skater Viktor An.

"It has yet to sink in," she said. "I still don't realise what an exceptional performance I have achieved here."

The Dutch men also set an Olympic record of three minutes 37.71 seconds, three seconds ahead of the Koreans, with Poland taking bronze ahead of Canada.

"This was an amazing race, the best we ever skated, the three of us," Blokhuijsen said.

"We sacrificed our individual programmes the last four years to do this. It is a great feeling. It is fantastic to race so fast in the Olympic final."

Home fans were left cheering after Russia proved too good for Japan in the women's bronze-medal decider.