The 22nd Winter Olympics opened with a spectacular ceremony in the Russian resort city of Sochi.

Athletes from 87 nations paraded before 40,000 people in the Fisht Stadium before president Vladimir Putin declared the Games open.

At a cost of £30bn, the Sochi Games is the most expensive Olympics in history.

The build-up to the Winter Olympics has been overshadowed by security fears, allegations of corruption, complaints from unpaid construction workers and concern about the rights of sexual minorities in Russia.

"The Olympics are about building bridges to bring people together," Bach said. "They are not about erecting walls to keep people apart. Embrace human diversity and unity."

US President Barack Obama and British Prime Minister David Cameron stayed away from the ceremony, which was attended by 44 heads of state.

Putin, the driving force behind the Games, avoided making a political statement as he stuck to protocol by using a single sentence to declare the Games open.

Spectators inside the stadium and television viewers worldwide were treated to a glittering show lasting nearly three hours and featuring 22 tonnes of fireworks.

There was a minor glitch early on when one of five giant snowflakes failed to open up to form an Olympic ring, leaving the Games' symbol incomplete.

However, the ceremony director Konstantin Ernst played down the incident, saying: "Zen buddhists have a saying that if you have the perfectly polished ball, leave a nick in it so you can understand just how perfectly it is polished.

"No normal person would get distracted by one snowflake that did not open from the story that is being told over two and-a-half hours."

In a grand finale, tennis star Maria Sharapova, who grew up in Sochi, carried the Olympic flame into the stadium before it passed through the hands of pole vault world record holder Yelena Isinbayeva, wrestler Aleksandr Karelin and gymnast Alina Kabaeva,

It was carried out of the arena by former figure skater Rodnina and ice hockey player Tretiak, who lit the cauldron in the middle of the Olympic park while Stravinksy's "Firebird Suite" filled the stadium.

In a break from Olympic tradition, the teams had earlier entered in the order of the Russian alphabet, with the host nation coming in last to deafening cheers.

Athletes from the competing nations appeared to emerge from their country's map courtesy of a dazzling light show.

Speed skater Jon Eley, a 29-year-old competing in his third Winter Olympics, carried the flag for the 56-strong British team, who have been set a target of three to seven medals by UK Sport.

Were Britain to win four medals it would equal Britain's biggest ever medal haul, at the inaugural Winter Olympics in Chamonix in 1924.

While some nations - including Nepal, Mexico and Pakistan - are sending only one competitor, the United States team of 230 athletes is the largest in the history of the Winter Games.

The US have never appeared at an Olympics on Russian soil having boycotted the Moscow summer Games in 1980.

The ceremony featured a colourful journey through Russian history, celebrating the country's rich heritage in art, music and ballet, with 3,000 performers and 2,000 volunteers taking part.

In a moving sequence the lights were lowered as performers, dressed in white to symbolise peace, danced to the strains of Tchaikovsky.

Hosting an Olympics for the first time since 1980, Russian athletes are under pressure to improve on the embarrassment of 11th place at the last Winter Games in Vancouver.

The nation has devoted £600m to elite winter sport since winning the bid to host these Games seven years ago.

The first medals of the Games will be decided on Saturday with five golds up for grabs in biathlon, cross country skiing, freestyle skiing, snowboarding and speed skating. 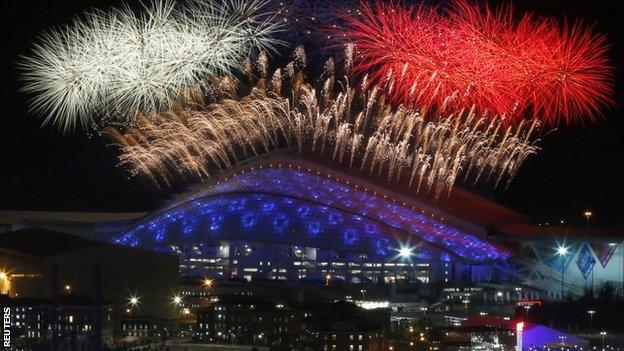