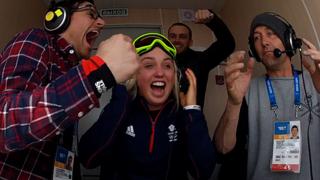 Jones, 33 won the historic bronze medal after scoring 87.25 points on her second run and became the first Great Britain to win a medal on snow.

The celebrations lasted long into the night and the BBC obtained mobile phone footage of Jones performing a 'happy dance' with her team-mates in the Olympic Park.

What The Hundred can learn from the Big Bash