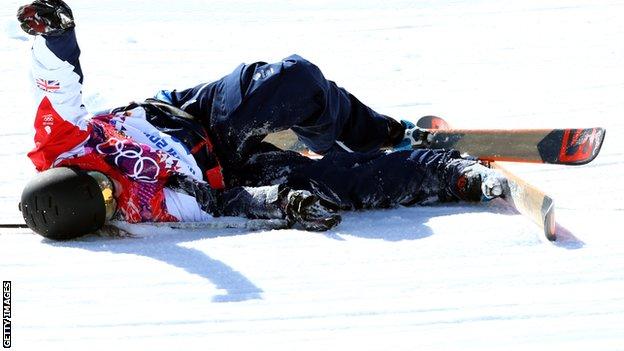 Britain's Winter Olympics medal hope James Woods admits he is "not 100%" fit ahead of Thursday's ski slopestyle event after crashing in training.

The 22-year-old, who won silver at the World Championships in 2013, completed a session on Tuesday after picking up a hip injury in a crash on Friday.

"I am a little upset because I wanted the opportunity to perform at 100% and I have to hope it doesn't hold me back too much," Woods told BBC Sport.

Slopestyle has been included in the Winter Olympics for the first time and, despite recently failing to qualify for the final of the Winter X Games, Woods is seen as one of Team GB's major medal hopes.

But Woods, from Sheffield, has been receiving physiotherapy and medical treatment following his crash and admits "some things are hurting."

On Monday, it was unclear whether he would recover to compete.

Woods forms part of the largest British skiing and snowboarding line-up at an Olympics, with 19 athletes in the squad.

One of them - Jenny Jones - won Britain's first Olympic medal on snow by securing bronze in snowboard slopestyle on Sunday.

Team GB have been set a target of between three and seven medals by UK Sport.