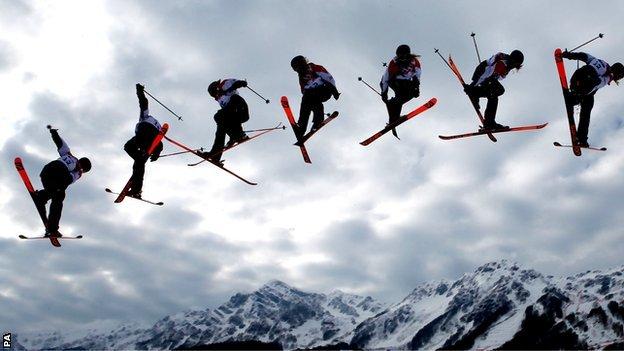 Arriving in Sochi a few days ago, it was hard to know what to expect.

Some sections of the American media had painted an image of a locked down war zone, full of wild, stray dogs, half-finished construction sites and unfriendly hosts.

As ever, there was and is a kernel of truth in some of those first impressions. It wasn't helped by the fact that many journalists arrived here to find their hotel rooms unfinished. We in the media love nothing more than a story which involves ourselves.

But having spent over a week here now, it's hard not to be impressed by the way things are going.

Sure, there are some problems. A few of the venues have not been full, and the warm weather and slushy snow up in the mountains is causing a problem for organisers.

The area surrounding the fenced-off Olympic Park is strewn with rubble and half-finished landscaping. While all the important venues and transport hubs are complete and working well - the organisers evidently ran out of time to apply the final touches which made London feel so polished.

And the Olympic Park feels disconnected from the centre of Sochi - about 45 minutes down the road - creating a slightly subdued, empty atmosphere once you come off the park.

But these are relatively minor grumbles considering the catastrophic predictions made in the run up to these Games.

Ok, so there is still plenty of time for a terror alert or worse.

It will only take one gay rights protest to make headlines around the world.

And only one athlete has to miss their bus or injure themselves to reignite the debate about whether this Black Sea coastal resort was the right place to bring the Olympic circus.

But so far my impression of the security is that it is even easier to move around here than it was in London. Police and volunteers are extremely friendly, most speak English and the endless screening which is now part of covering major international sporting events is very light touch.

As I have written before, there is a heavy police and army presence on the roads and around the Park. But is that very different to the situation we experienced in London when members of the armed forces greeted fans on the entrance to all Olympic venues? I have actually found their presence here reassuring.

On the question of gay rights, Sochi's special protest zone half an hour down the coast in Khosta has so far been silent. Is this a sign that the Russian authorities have refused to grant permission to those keen to demonstrate or is it another dog that hasn't barked?

The president of the International Olympic Committee (IOC) Thomas Bach told athletes coming here that they would be free to use news conferences to make political statements if they so desired. But most have gone out of their way to duck the issue.

The openly gay ski jumper Daniela Iraschko-Stolz from Austria said earlier this week that protests were not worth it because no one in Russia cared. It seems hard to believe that we will get through the 17 days of these Games without someone saying or doing something, but so far the competitors seem determined not to stoke the controversy.

Empty seats in venues are always a problem for Olympic hosts. We had it in London and there are certainly some sessions for some sports which are being played out in front of minimal crowds.

I went up to the mountains on Sunday for the men's downhill final - one of the biggest events in any Winter Olympics - and the competition was well under way before most of the seats were full.

In the four mountain venues there does seem to be an issue around fans arriving late. Even with the vast sums of money invested in the new train line from the coast to Rosa Khutor and the many cable car networks, it simply takes a very long time to get up to the area where the snow sports are taking place.

Sochi 2014 organisers are hoping fans will get the message that they need to arrive earlier in the coming days.

As for the coastal arenas, I was in the Iceberg Skating Palace on Monday for the final of the 1500m short track speed skating where the adopted Russian Viktor Ahn was going for gold. The venue was almost full and the atmosphere noisy and passionate - even when he had to settle for bronze.

It was even louder the night before when Russia's figure skaters won the team gold.

The only real concern for organisers at this stage would seem to be the weather. The IOC's co-ordination commission is receiving seven day forecasts from the hosts every day. There is alarm at the prospect of rising temperatures - due to rise to 7C - up in the mountains.

In the week since I filmed at the very top of the men's downhill course (2000 metres above sea level) you can see the white peaks have steadily shrunk, replaced by a creeping brown visage of bare trees and mud.

The hosts have a contingency programme - essentially tons of stored snow from last year kept under giant covers. So while there will need to be tweaks to courses, there is confidence at the top of the IOC that the weather won't delay or force the cancellation of any events.

As with any major global sports event, hosts place themselves in an unforgiving spotlight. Thanks to the political and diplomatic backdrop, Sochi has had more scrutiny than possibly any previous Winter Olympic host.

But as with so many past events, once the medals start being handed out, a lot of the tensions simply melt away.