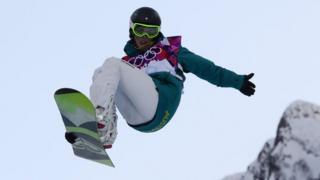 American 2002 gold medallist Kelly Clark top-scored with 95.00 in heat one, just ahead of Spain's Queralt Castellet. Australia's Torah Bright, the defending champion from Vancouver, scored 93.00 in the second heat.

Clark, Castellet and Bright were among six riders who made it straight through to the final, while the rest will contest a semi-final before they can battle it out for the medals.