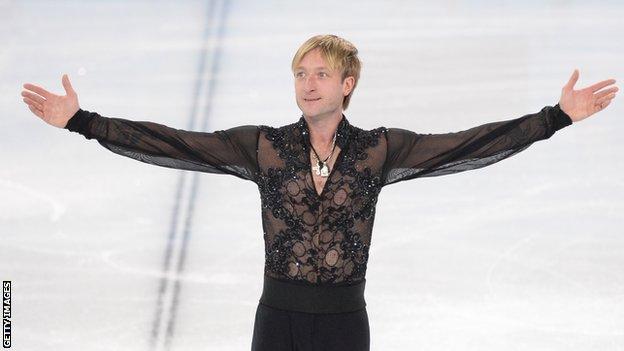 Russian Evgeni Plushenko retired from the sport after withdrawing from the Sochi men's individual figure skating competition because of a back injury.

The 31-year-old had helped his country win team gold on Sunday and was aiming for an unprecedented fifth Olympic Games medal.

"I think it's God saying, 'Evgeni, enough, enough with skating'," he said.

The gold-medal hope, who suffered the injury in the warm-up, described the pain as "like a knife in my back".

Japanese teenager Yuzuru Hanyu notched up a world record score of 101.45 to lead after the short programme.

"I was so surprised by my score," Hanyu beamed after skating to Parisian Walkways by Gary Moore.

"My legs were shaking a little bit. I was really, really nervous," said the 19-year-old.

Plushenko jarred his back in front of the judges and home crowd, and as a consequence withdrew from the competition before he was about to perform in the short programme. He later announced his retirement from all competitive skating.

Plushenko won gold at the 2006 Olympics, three world championship and seven European titles and 10 Russian crowns during his career.

However, success came at a price and he needed 12 operations on his knee, back and groin during the 16 years he competed at professional level.

This is Plushenko's second retirement from skating.

His first was after he took Olympic gold in Turin in 2006. However, he returned after nearly four years out to win silver at the 2010 Vancouver Olympics.