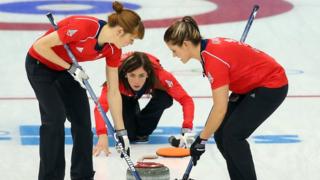 Great Britain's women's curling team equal the Olympic record score for the second time at Sochi 2014 as they thrash Japan 12-3.

The round-robin victory mirrored the scoreline in their six-end win over United States on Tuesday.

Eve Muirhead's world champions are joint-third in the table after five of eight matches, with the top four to progress to the semi-finals.

VAR - is it a hit or miss in football?