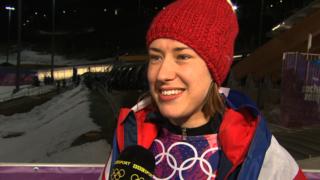 Lizzy Yarnold says she is "so chuffed" after winning Great Britain's first gold medal of the Sochi 2014 Winter Olympics in the women's skeleton.

Yarnold, 25, dominated the skeleton competition from start to finish and produced a solid final run to finish 0.97 seconds ahead of Noelle Pikus-Pace of United States.

The win ensured Britain claimed the skeleton title for the second successive Winter Olympics after Amy Williams won gold at the 2010 Vancouver Games.