British sliders have won medals at all six Olympics in which the sport has featured, and in Yarnold and Amy Williams, Team GB can boast back-to-back Olympic champions.

Yarnold is also the World Cup champion and team-mate Shelley Rudman the reigning world champion. Rudman's Olympic silver medal at Turin in 2006 and Alex Coomber's breakthrough bronze in 2002 add to the medal haul, plus world championship and World Cup titles for Kristan Bromley in the men's event.

So just how does Britain, without its own track, rule the skeleton scene?

The sport evolved in the Swiss resort of St Moritz in the late 19th century when wealthy British tourists took to cavorting around town on sleds, looking apparently, like skeletons. The sport featured in the 1928 and 1948 Olympics, with Britain bagging bronze both times, before sitting out the next 54 years. It was reinstated for Salt Lake City in 2002, when a 29-year-old female Royal Air Force officer named Coomber kick-started a rich heritage.

"Somebody asked BAE Systems to build a sled and they assigned a PhD student to it. He was called Kristan Bromley. None of the soldiers would try Kristan's sled, so the only way he could test it was to ride it himself, so that's how he got into the sport.

"Kristan produced a bullet of a sled in the late 1990s and that led to him and Alex Coomber becoming overall World Cup champions in 1999. The sport gained Olympic status later that year and UK Sport invested National Lottery funds.

"We really got through to 2002 on Kristan producing the world's best sled, and the pure luck that probably the most natural slider ever to do the sport, Alex Coomber, had fallen into it through the RAF. Alex's bronze medal secured the funding and then we began to really systematise the sport.

"We put a very simple plan in place: to identify athletes with the potential to be the fastest starters in the world, put them on the ice every day - because there used to be a big sliding deficit to the other nations - employ the world's best coaches, and put them on cutting-edge equipment. Really for the last 14 years, all the sport has done is ruthlessly and relentlessly pursue that formula."

Why skeleton and not luge?

Simon Timson: "If you live in Koenigsee in deepest Bavaria, your Wednesday afternoon PE lesson from age six is luge. It's a finer, more difficult skill to master and takes a lot longer. You can't actually start bobsleigh or skeleton until you are 16, legally.

"So even if we don't start athletes like Amy Williams until they are 19 or 20, we don't have that same deficit in practice to make up that we have in luge, because realistically, how many British six-year-olds are going to be on a luge track every week?" 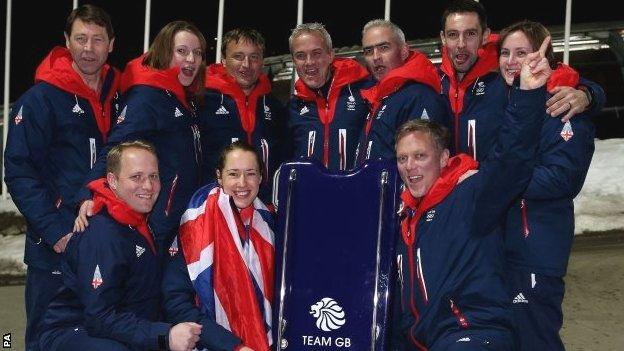 Britain does not have its own ice track but does have an impressive 140m push-start facility at the University of Bath.

The track, built in 2001, features wheeled sleds running on rails, and allows athletes to work on their sprint starts all year round. Around the world there are tracks in Germany, Switzerland, Italy, Austria, France, Norway, Japan, Canada and the United States of America. The British team mainly uses the Igls track in Austria as a base.

Timson: "For developing athletes, we aim for a minimum of 60 runs a year on ice, which doubles to 120 in year two. From then on we're chasing the magic figure of 120-150 runs a year, which is comparable to all the other countries. You're pulling five Gs [five times the force of gravity] so it might only be a minute's run, but it is incredibly attritional on the body. There is a limit to what you can do in a day."

Training, travel, talent identification, research and development, administration and staffing costs all come out of the UK Sport grant, plus private sponsorship.

British Skeleton received £2.1m of National Lottery and Exchequer investment from UK Sport for the four-year cycle leading up to Vancouver.

"We knew someone had to win a medal in Vancouver or the sport wouldn't have received funding," said Williams. "That gold medal allowed this funding for Lizzy's programme to exist. That's the brutal side of it."

Timson's initial talent identification programme in summer 2002 picked out six aspiring athletes. They included Williams, Rudman, Greg Kirk, who won the world junior championships in 2004, and Adam Pengilly, who was a silver medallist at the World Championships in 2009 and is now an International Olympic Committee member.

Another talent campaign by UK Sport and the English Institute of Sport in 2008 called Girls4Gold spotted Yarnold, a county-level heptathlete. Four years later, she was the junior world champion and is now the Olympic champion.

A new scheme called Power2Podium for potential male and female sliders between 17 and 25 was launched in 2011 and will open again after Sochi.

What were the raw materials they were after?

"Power, speed, explosiveness out of the blocks," said Williams, a talented sprinter at the University of Bath.. "A fast push is so important - one-tenth of a second at the top could be two at the bottom.

"You are in the gym doing strength sessions every day to get that power off the block.

"Your head is also pushed into the ice by the G-force, so you have to have a very strong neck. You do similar things to rugby players in regards to strengthening the neck in training.

"The new breed of girls coming through are bigger and heavier than they have been in the past. Lizzy fits that profile perfectly.

"Plus, having the mindset and psychology of an athlete, being able to lie on that sled and be calm under pressure and react quickly to mistakes, not in five corners' time."

But as well as athletic ability, the selectors were looking for drive.

Williams explained: "For me, every decision, every single day was, 'Will this help me win gold, yes or no?' Is this ice cream going to help me? No? Then don't eat it. It was as brutal as that.

"It's all those little tiny decisions that give you confidence and all affect your performance. If you can perfect every part of your training in the summer when you are not on the track, it all mounts up."

Yarnold added: "Gold medal winners are made in the gym by getting there first and leaving last and you complete every rep to the best of your ability. That's what I have learnt from Amy - that normal girls can become champions. You just have to put in the effort, the time and the dedication."

Sled technology, as well as that for helmets and suits, is an ongoing quest for speed and better aerodynamics. Within certain boundaries, anything goes.

Bromley was nicknamed "Dr Ice" after earning his PhD from the University of Nottingham with a thesis entitled "Factors affecting the performance of skeleton bobsleds".

Bromley's early prototypes sparked the ongoing success of British skeleton, and he and Rudman still race on sleds designed and produced with his brother Richard by their company, Bromley Technologies Ltd.

UK Sport also has technology partnerships with BAE Systems and McLaren, of Formula 1 fame, who work with a number of British sports, including skeleton, cycling, sailing, rowing and canoeing, to provide cutting-edge research, design and engineering.

There is a big science behind this sport - it is not simply lying down on a sled.

"Williams's sled, which she called "Arthur and was designed by engineering post-graduates at the University of Southampton, was a product of this programme, as is Yarnold's sled "Mervyn", named after one of her early sponsors.

A sled costs up to about £15,000, but with the technology and research and development that goes into each GB sled the figure rises to £100,000.

"There is so much that goes into the skeleton that nobody sees," said Williams. "From the technology, to the runners on the sled, to the hours in the wind tunnel to perfect your aerodynamic positioning.

"Even before the race you are sewing up everything so nothing on your suit is flapping in the wind and causing drag. I could talk about all the details for hours.

"There is a big science behind this sport - it is not simply lying down on a sled.

"When I started, no-one taught me the science - the corners, the pressures, what the sled does, I had to figure it out. Now they get instruction straight away and the learning curve is massive."

In line with British Skeleton's early ethos to secure the best coaches, they landed Andi Schmid, an Austrian luger and former world skeleton champion. The 52-year-old from Innsbruck is supported by a team of world-class coaches and support staff.

"Starting from the very beginning, 12 years ago, there was nothing - just good ideas and strong people, but we had to start from scratch," said Schmid, who has had stints as both head coach and performance director.

"Because we don't have our own track, we have to be really strong in understanding how we coach and how we identify the right athletes."

Williams added: "It's really important to have coaches and athletes who are on that same wavelength. Lizzy and Andi have got a winning formula, like I did four years ago. The way they talk about her lines, the tracks and the steers, they've gone from strength to strength."