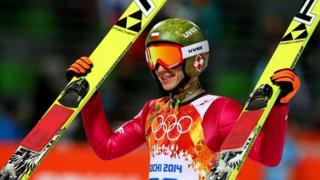 Stoch's final score of 278.7, was just enough to edge out the 41-year-old Kasai, appearing at his seventh Winter Olympics, by just 1.3 points.

The victory gave the 26-year-old Stoch his second gold of the Sochi Games to add to his win in the men's normal hill competition on Sunday.