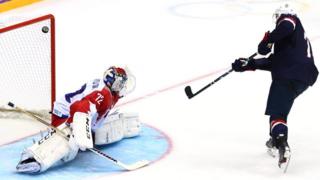 US beat Russia in thriller

The United States beat Russia in a thrilling shoot-out to take the extra point after their Group A ice hockey match finished 2-2.

TJ Oshie scored his fourth penalty of the shoot-out to give the US victory after Ilya Kovalchuk missed in the eighth round.

The winner of each of the three groups, plus the highest ranked runner-up, progress automatically to the quarter-finals, with the other four places decided by play-offs.