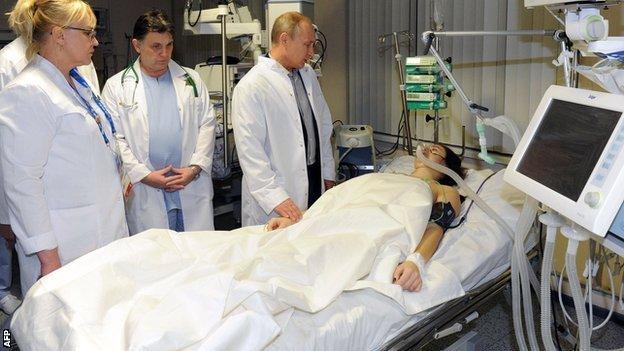 Russia president Vladimir Putin has visited Maria Komissarova in hospital after the freestyle skier fractured her spine in training on Saturday.

Komissarova, 23, required an emergency six-and-a-half hour operation after suffering a fracture and dislocation.

The Russian freestyle ski federation said her condition remained "grave but stable" and she could be moved to another hospital.

Komissarova had been due to compete in ski cross competition on Friday.

She was taken to hospital, close to Rosa Khutor Extreme Park, after the accident.

"Doctors carried out the necessary examination and took the decision to operate on her on the spot," the Russian federation said in a statement.

Putin visited her on Saturday evening to wish her a rapid recovery and phoned her father after the skier told him he was extremely worried. Her father is due to arrive in Sochi from St Petersburg.

Ski cross is an event in which skiers race down a mountain against each other while negotiating big-air jumps and obstacles. The discipline was added to the Winter Olympic programme in 2010.

International Olympic Committee president Thomas Bach said it was a sport "with a certain risk".

He added: "You will never be able to exclude every kind of risk - we feel very sorry for the athlete.

"We hope that the operation will be successful and that she will be back."

In 2012, Komissarova became the first Russian woman to win a World Cup medal in ski cross when she finished second in the event at Grindelwald, Switzerland.

She was then unable to compete for six months of 2013 after having surgery on a leg injury.