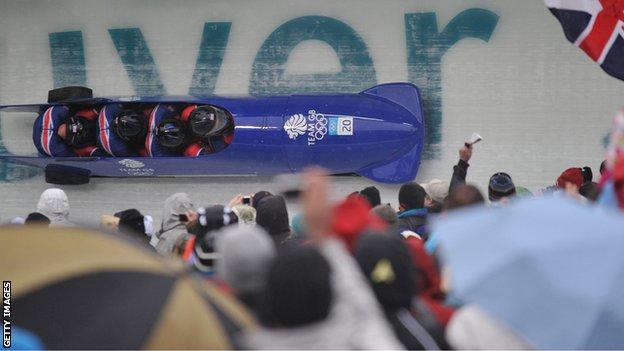 Britain's four-man bobsleigh team have arrived in Sochi in confident mood after putting the final touches to their Olympic campaign at a training camp in Germany.

Pilot John Jackson and brakemen Joel Fearon, Bruce Tasker and Stuart Benson won World Cup silver in Lake Placid in December and followed it up with silver at the European Championships last month.

"The Sochi track seems to suit my driving style quite well," said Jackson, who ruptured his Achilles in July but astounded medical experts by returning to competition in November.

"We gelled with the track straight away. We came fifth in the Olympic test event in February so we are hoping to make the step up into the top three and see how we go from there."

In Germany, the quartet have been working on their starts on a track with a similar profile to the 17 curves of the Sochi layout so they can hit the ground running when competition starts on Saturday.

"We've trained on a track with a short, flat start and then a drop-off and we've done a lot of work fine-tuning that, so hopefully in the first few pushes we can really nail it," said Benson.

The team have taken advantage of a UK Sport technology partnership with BAE Systems and McLaren and have been working to improve their equipment and aerodynamics.

"We've been doing a lot of work this year in the wind tunnel and had an F1 racing team working alongside us, and we've made small changes to the aerodynamics and the chassis," added Jackson, a Royal Marine.

"We hope the little 1% here and there will make all the difference."

The only British bobsleigh gold medal came exactly 50 years ago, when Tony Nash and Robin Dixon, now Lord Glentoran, won the two-man title in Innsbruck in 1964.