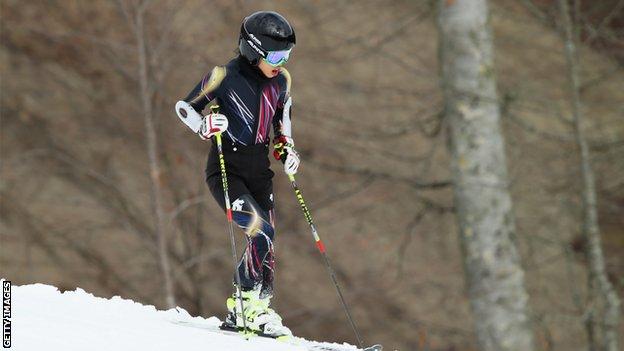 Violin virtuoso Vanessa-Mae will make her Olympic debut in the women's giant slalom event from 05:30 GMT on Tuesday.

She will compete for Thailand under her father's name Vanakorn after qualifying for the Games last month.

The British citizen, 35, who has sold more than 10 million records worldwide, has been skiing since she was four.

"Finishing within 20 seconds of the leaders would be a good effort," said former GB Olympic skier Emma Carrick-Anderson.

Vanessa-Mae, who was born in Singapore to a Chinese mother and Thai father, was brought up in England but will be only the third person to represent Thailand at the Winter Olympics.

She is comfortably the lowest-ranked racer in the field, at 2,253rd in the world, but some of skiing's biggest names are looking forward to competing alongside her.

"I find it thrilling that people like that [are here]," said Germany's Maria Hofl-Riesch, a three-time Olympic champion who won the super-combined event and was second in the super-G in Sochi.

"When you see Vanessa-Mae, she's so small and fragile, you can't imagine how she can finish a run like that or even hit a gate. Babsie [team-mate Barbara Wirth] told us that she didn't do so badly and we'll be watching closely."

Carrick-Anderson, who competed in four Olympics, said the musician's biggest problem would be coping with the slick slopes that are water-injected overnight to make them extra icy.

"If she had to race last week it would have been an absolute nightmare," said Carrick-Anderson.

"Even on my skis, which are really sharp, skiing on the downhill piste was gruelling. The top part was sheet ice, proper shiny 'ice rink on its side' type ice.

"No recreational skier would be able to do anything on that. It would be terrifying - they would be going sideways. You couldn't even try to grip."

The Rosa Khutor giant slalom course will begin lower down the mountain, and the recent warm weather is likely to have softened the snow. Racers have two runs, with the fastest combined time winning.

"Now it has warmed up, it is going to be that little bit more forgiving," added Carrick-Anderson.

"By the time she goes there will probably be a little track, which will also make it easier for her."

Britain's Chemmy Alcott had a look at the giant slalom course on Monday and believes Vanessa-Mae, who is now based in the Alpine resort of Zermatt in Switzerland, will cope with the conditions.

"I skied next to the piste and the injection looks great and is smooth so I think she will be fine," said Alcott, who came 19th in the downhill and 23rd in the super-G in her fourth and final Olympics.

Vanessa-Mae says she is well aware of the enormous challenge she faces against a field of vastly-experienced competitors.

"If I end up last I have no problem with that," she said.

"I know that I spent six months training. Other athletes have been training since they were six years old so that's something you can't compare.

"I just want to have a good time. I want to have two fun runs that I can say I'll remember for the rest of my life.

"To be here at the Olympics is a once in a lifetime opportunity and I feel so blessed to have this chance to go from artist to athlete, to just experience this is surreal almost."