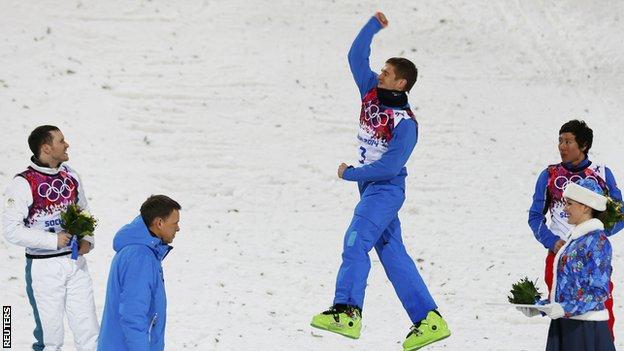 Belarus's Anton Kushnir won the men's aerials to complete an Olympic double in the event for the former Soviet state in Sochi.

Following compatriot Alla Tsuper's victory in the women's version of this freestyle skiing event, Kushnir added another with a comfortable win.

He succeeds another Belarusian, Alexei Grishin - who was knocked out in the heats - as Olympic champion.

Kushnir, 29, claimed victory thanks to a stunning second jump which scored an astonishing 134.50 points.

It was his reward for tackling a jump of the highest degree of difficulty and then producing an almost flawless execution.

"This was my dream from childhood and I'm really happy I was able to achieve it," said Kushnir.

"From the start the plan was to do that jump in the super final. We've been preparing it for a long time, since 2009. I thought it might go well and it did."