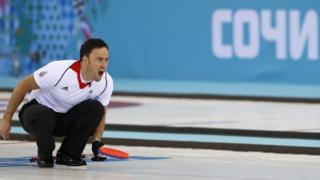 Great Britain skip David Murdoch plays an incredible final stone as the men's curlers beat Norway 6-5 in a play-off to reach the semi-finals at the 2014 Winter Olympics in Sochi.

The British quartet were trailing 5-4 going into the final end before Murdoch's final shot, which saw him take out the Norway stone to score a double.

Britain will now face Sweden on Wednesday for a place in the gold medal match.