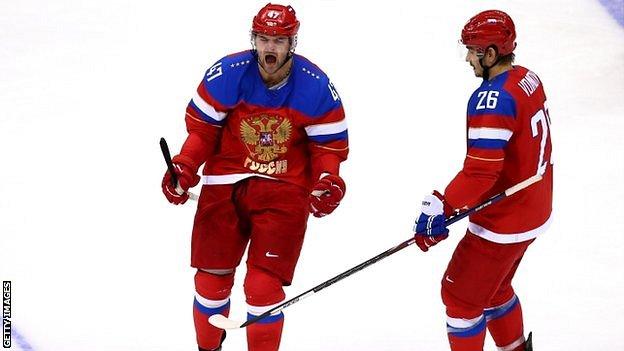 Russia will play Finland in the men's ice hockey quarter-finals at Sochi 2014 after winning a testing play-off 4-0 against a weaker Norwegian team.

Norway held Russia in a goalless first period but went behind to an Alexander Radulov strike through Lars Haugen's legs and an Ilya Kovalchuk rebound.

A late empty-net goal by Radulov as Norway chased the game, then an Alexei Tereshchenko strike, flattered Russia.

Russia are competing in their sixth Winter Olympics, with their best performance at the 1998 Games, when they won ice hockey silver

The United States and Canada are already through to the quarter-finals.

Their opponents will be confirmed following the remaining play-offs later on Tuesday.

Russia's superstar forward Alex Ovechkin - the reigning NHL MVP with the Washington Capitals - is staying positive ahead of Wednesday's quarter-final showdown with Finland, despite having scored just once in four matches in Sochi.

"Everybody knows we have such a good, talented team on offence," said Ovechkin.

"We just try to keep our energy, and keep our emotions [in check]. Tomorrow we're going to need emotions and strength for the quarter-finals against Finland."