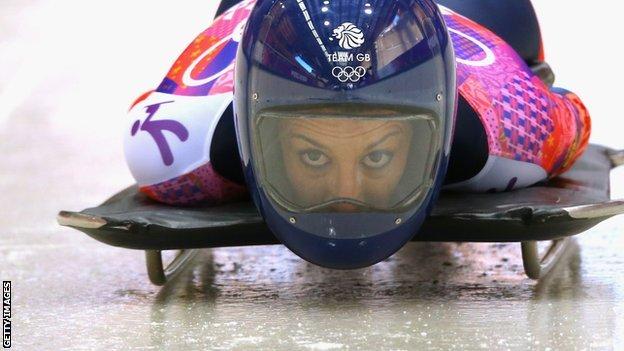 Team GB's Shelley Rudman says she is proud of her performance at the Winter Olympics in Sochi, despite missing out on a medal.

The reigning skeleton world champion won silver at the 2006 Games but could only manage a 16th-place finish in Russia last week.

Team-mate Lizzy Yarnold went on to claim gold in the event.

"I tried to absorb the atmosphere and I'm just so proud that I made it there," Rudman, 33, told BBC Wiltshire.

"I qualified for my third Olympics, which in its own right is good going.

"It wasn't my best result on a track but I was prepared for that. I couldn't connect with the track in training but I put myself out there and tried to race as fast as I could.

"But it just wasn't my two days and the result was what it was."

Rudman's silver in Turin was Great Britain's only medal of the 2006 Games.

The Pewsey-based athlete then claimed the World Cup title in the 2011-12 season and last year became the first British female to win skeleton gold in the World Championships, in St Moritz in Switzerland.

But after a difficult stint in Sochi, Rudman says she has yet to decide whether to compete at her fourth Olympics, in Pyeongchang in 2018.

"I've definitely got my eye on Pyeongchang but I'm going to make my decision after having a really nice holiday," she added.