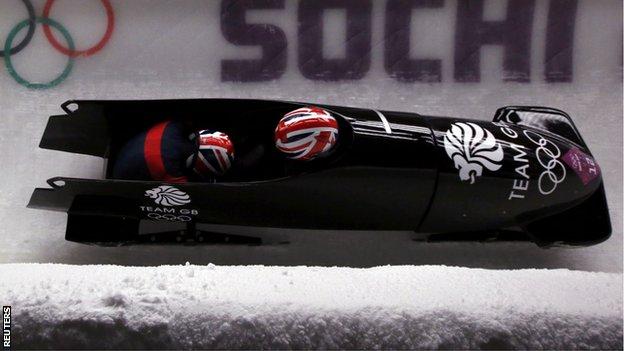 Great Britain's women's bobsleigh crew of Paula Walker and Rebekah Wilson finished in 12th place after the first day of competition in Sochi.

The duo clocked a cumulative one minute 56.76 seconds from their two runs at a rain-lashed Sanki Sliding Centre.

Pacesetters USA 1 are 1.87 seconds ahead of the Britons.

Canada 1, piloted by defending Olympic champion Kaillie Humphries, are 0.23 secs adrift in second with USA 2 0.56s back in third.

The medal placings will be decided after the third and fourth runs on Wednesday.

GB's Walker, who was 11th at Vancouver 2010 with brakeman Kelly Thomas, drove two consistent runs to clock 58.36s and 58.4s respectively. The pair's fastest start time on Tuesday was 5.35s.

"I made it clear that this track hasn't been in love with me in training but it clicked with me today," said Walker. "Maybe tomorrow it can get even better for us."

"The second run felt much better and an improvement from training," added Wilson. "We might see a bit of movement in the rankings tomorrow and a top-10 finish would be good."

USA 1 pilot Elana Meyers, the Vancouver bronze medallist, and team-mate Lauryn Williams set the fastest time of the night with their first run of 57.26s. They also recorded the best start time of 5.12 secs on their second run.

Walker and Wilson won the World Junior Championship in 2011, and after Wilson took a break from the sport, the pair were reunited ahead of the Sochi Games at the expense of former world champion Gillian Cooke.