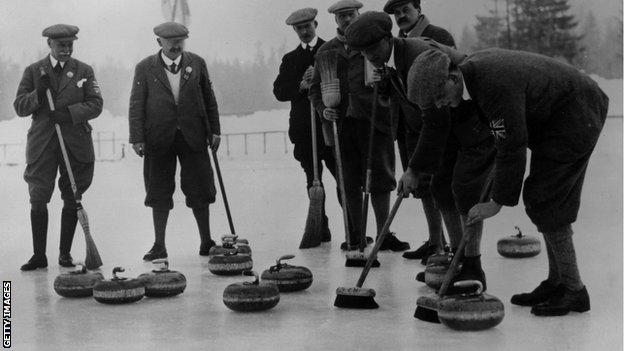 Great Britain have already secured two curling medals at Sochi 2014 and the men's team are out to make sure one of them is gold when they face Canada in the Winter Olympic final on Friday.

Here are 10 facts about the sport to impress your friends ahead of the big match, which will be shown live on BBC TV, online, mobile devices and app from 13:30 GMT.

1. The first recorded evidence of curling being played in Scotland and the Netherlands dates back to the 16th century. The first rules of the game were drawn up in 1838 and the Grand Caledonian Curling Club, the sport's first governing body, was formed in Edinburgh.

Four years later, the Earl of Mansfield gave a demonstration of the sport on the ballroom floor of Scone Palace near Perth during a visit by Queen Victoria.

She was so impressed that she gave permission for the club's name to be changed to the Royal Caledonian Curling Club - which still governs the sport in Scotland today.

2 Celebrity curling fans include George Clooney, who reportedly got hooked on the sport while filming the movie Perfect Storm in Canada in 2000, and rocker Bruce Springsteen, who, according to the Toronto Star, loves to stop off for a game when he tours with the E Street Gang.

Meanwhile, footballers at Premier League club Southampton have become so addicted to the sport they have been trying out their own version of curling in their dressing room.

3. Curling stones are made of granite and weigh between 17.24kg and 19.96 kg. The granite comes from two sources - the Scottish island of Ailsa Craig and the Trefor Granite Quarry in Wales. Stones for the Sochi Winter Olympics are manufactured by Kays of Scotland, who have been making curling stones since 1851 and have the exclusive rights to the Ailsa Craig granite.

The sweeping brushes used to be made of corn strands and were similar to household brooms. Broom heads are now made of fabric, hog hair or horse hair with nylon fabric covering the brush head.

4. Curling has featured in many television programmes and films, including the Beatles movie Help! where the Fab Four play the game, only for one of the stones to be booby-trapped by a bomb. In On Her Majesty's Secret Service, James Bond walks past girls playing curling at the top of Piz Gloria - Blofeld's mountain-top retreat.

5. In Scotland, curling competitions were held outdoors on frozen lochs and ponds until the advent of indoor ice rinks in the 20th century. However some outdoor competitions still remain in Scotland including some staged by Carrbridge Curling Club in Inverness-shire.

The best known outdoor competition in Britain was the Grand Match, which was held on the Lake of Menteith in Stirling and was traditionally between the north and south of Scotland. However the tournament, which can attract thousands of curlers, has not been held since 1979 because the loch has not frozen to the required depth of seven inches of ice.

6. In 1912, bodies that were recovered from the Titanic after it sank off the coast of Canada were taken to the Mayflower Curling Club's home in Agricola Street, Halifax, Nova Scotia, which was set up as a temporary morgue. The building was the only one in the city that was large enough and cold enough for the task.

7. England's most important contribution to 19th-century curling was the invention of artificial ice. In 1877, a rink opened in Manchester and the world's first curling match on artificial ice took place in March of that year. But the rink closed soon after.

8. In 2008, American TV network NBC secured an exclusive option to air a 10-episode sports reality show called Rockstar Curling. The plan was to give the winners a chance at competing in the US Championships and even go to the 2010 Winter Olympics. Think X-Factor on ice. In the end, the option wasn't taken up.

9. Curling made its Olympic debut in Chamonix in 1924 where Great Britain beat Sweden and France and, after demonstration events at Lake Placid (1932), Calgary (1988) and Albertville (1992), it finally made its full Olympic medal debut in Nagano in 1998.

10. Good sportsmanship, referred to as 'the spirit of curling' is an integral part of the game. You should always congratulate your opponent on a good shot, and never cheer a mistake or miss. Traditionally the winners have to buy the losers a drink after the match.