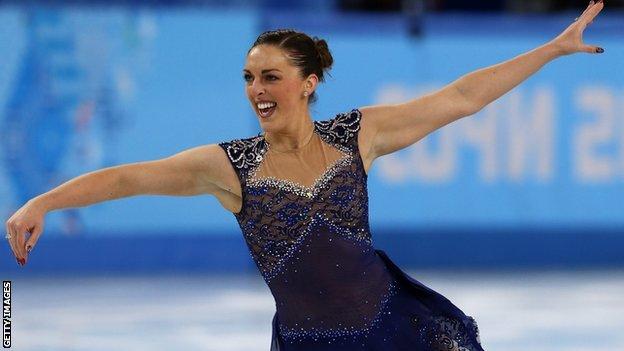 Jenna McCorkell fell agonisingly short of qualification for the free skating at the Winter Olympics after finishing 25th in the short programme in Sochi.

The Coleraine woman ended one place and just 0.22 of a point outside the top 24 qualifiers for Thursday's event.

The Great Britain skater's score of 48.34 was 1.75 below the season's best she set in the team event at the Games.

The 27-year-old also failed to make the last 24 at the last Winter Olympics in Vancouver in 2010.

The Northern Ireland woman had already been in action on the Sochi ice as she skated in the team competition on 8 February.

In contrast to her disappointing Olympic debut four years ago, McCorkell avoided any falls in Wednesday's short programme as she managed to land all her jumps.

However, her component marks were lower than she would have hoped for as she had to settle for an overall 48.34 which was some way below her personal best of 53.80.

Despite that, McCorkell appeared content with her performance as she waited for the results with her coaches.

The Northern Ireland woman endured a chastening debut Olympics in Vancouver four years ago when a couple of tumbles led to her failing to make the cut for the longer free programme.

McCorkell showed her true ability as she regrouped a couple of weeks later to finish 12th at the World Championships.

Since those 2010 competitions, McCorkell has gone on to bring up her total of British titles to a remarkable 11 although she endured a disappointing European Championships last month when a disappointing short programme meant that she could only manage 24th place - well off her best Europeans showing of eighth in 2008.

The 27-year-old had set the goal of a top-15 finish in Russia although she acknowledged she would have to be at her absolute best to achieve that.