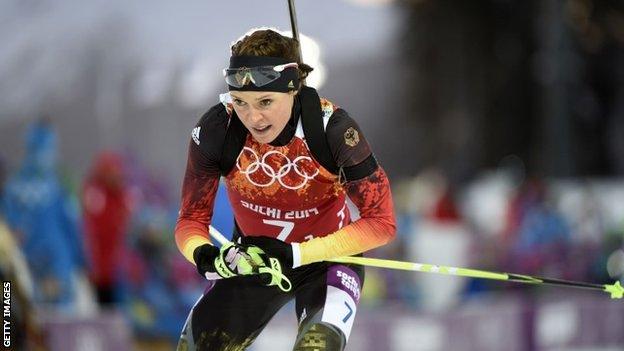 Both tested positive for methylhexanamine with A and B samples.

Sachenbacher-Stehle, who won gold in 2002 and 2010, was fourth in two Sochi events but has now been disqualified.

Police officer Frullani will be replaced in Saturday's four-man event by Samuele Romanini.

The IOC confirmed on Saturday that its disciplinary commission had decided to amend the results of the women's 12.5km mass start and mixed relay events because of Sachenbacher-Stehle.

She crossed the line fourth in the 12.5km mass start and was part of the German team which has also now been disqualified.

Frullani, 34, is a former international decathlete who competed at the 2006 European Championships.

Sochi 2014 has the "most stringent anti-doping programme" seen at a Winter Olympics, with 2,453 tests, according to the International Olympic Committee before the Games

But it is Sachenbacher-Stehle's drugs test which is the bigger news, having won gold in the team sprint in the last Olympics in Vancouver and in the 4x5km in Salt Lake City.

"This is the worst nightmare you could imagine. I can't explain how the doping test could be positive," the 33-year-old said.

"We only want clean performances. Every doping case is initially a disappointment but also proof that the system works."

Before the Games, Russian biathlete Irina Starykh, who was a medal hope for the hosts, withdrew after failing a drugs test.

Germany have been the third most successful team in Russia, with eight gold medals, four silvers and four bronzes. Italy are 21st with two silvers and six bronze medals.