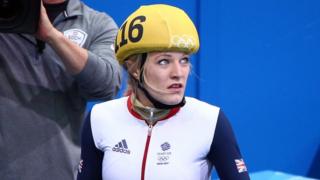 Great Britain's Elise Christie fails to qualify for the Olympic 1,000m short track speed skating final after receiving a penalty in the semi-final.

Christie had earlier been disqualified after a crash in the 500m final and was also penalised for an infringement when crossing the finish line in the 1,500m.