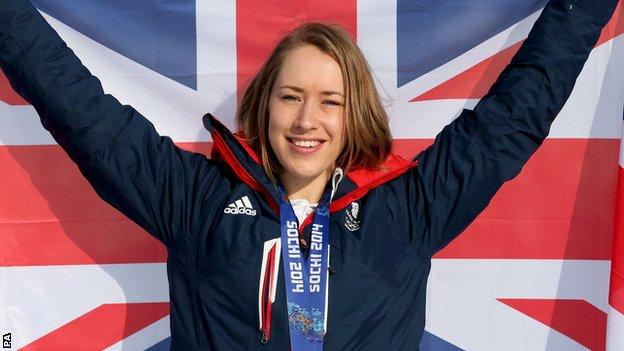 Skeleton champion Lizzy Yarnold has been chosen to carry the Union flag and lead Team GB into Sunday's closing ceremony of the Sochi Winter Olympics.

The 25-year-old, winner of one of only 10 gold medals in British Winter Olympic history, was selected by Team GB chief Mike Hay and his deputies.

Yarnold dominated the women's skeleton event, and won by almost a second - a huge victory margin - on 14 February.

GB's haul of four medals equals 1924 - their previous best at a Winter Games.

However, Britain could yet break that record, with two teams competing in the four-man bobsleigh on Saturday and Sunday.

Yarnold will be joined at the closing ceremony by her 55 team-mates including the men's curling rink, who won silver, their bronze medal-winning female counterparts and snowboarder Jenny Jones, who took bronze.

It is the fourth consecutive Games in which a British athlete has won a skeleton medal, after Alex Coomber (Salt Lake City 2002, bronze), Shelley Rudman (Turin 2006, silver) and Amy Williams (Vancouver 2010, gold).

Yarnold, born in Sevenoaks and now based in Bath, said: "It's been an indescribable experience here in Sochi.

"I came to these Games with the goal of competing to the best of my ability, doing my country proud, and supporting my team-mates across all of Team GB.

"To have been selected for this honour is so far beyond anything I could have ever imagined. It makes what has already been an incredible experience just that much more special, and I am extremely grateful."