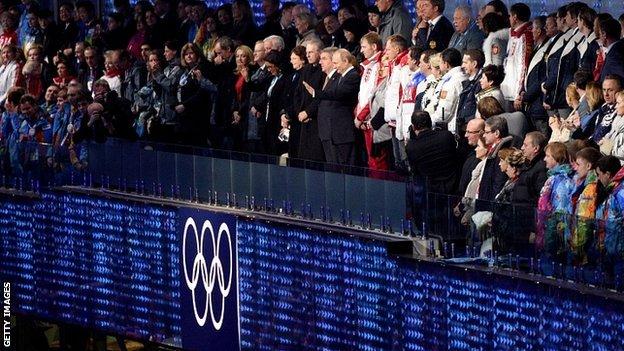 The tagline of the 2014 Winter Olympic Games - seen throughout Sochi - was "Hot. Cool. Yours."

But there has been another slogan on display here.

Located on the side of the new Formula 1 grandstand, currently being built near the Olympic Park, the phrase "Russia - Great, New, Open" provides a better insight into how President Vladimir Putin wants the world to perceive his country now.

But with the final medals awarded, and the Olympic flame extinguished, has Russia achieved what it set out to do? Were the first Olympic Games to be staged in the country since 1980 a success?

And what are the wider implications for the International Olympic Committee (IOC) as it now turns its attention to future Games?

Given the desire to look beyond its borders, it's perhaps fitting that two of Russia's greatest sporting success stories at the Games came from athletes born outside the country.

Victor An, a Korean who became a Russian citizen in 2011, won gold in the 500m short track speed skating and followed it up minutes later by helping his team beat the USA in the 5,000m relay.

The roar inside the Ice Cube Arena when An burst through the pack late in the 500m race to take gold suggests Russians have fully embraced the 28-year-old as one of their own.

The same applies to Vic Wild, who won two gold medals in the men's snowboarding parallel slalom and giant slalom.

Born in the US, he switched to compete for Russia after marrying snowboarder Alena Zavarzina, who also took home a bronze in her event.

Home-grown stars shone too, however.

Fifteen-year-old figure skater Yulia Lipnitskaya became a national heroine when she helped Russia to team gold but was unable to deliver an individual medal.

But that didn't stop chants of "Yulia, Yulia!" ringing out every time she took to the ice and dozens of bouquets being thrown from the stands at the end of every performance.

Adelina Sotnikova did, however, deliver the top prize for her country after a thrilling, if somewhat controversial, final battle in the free programme.

And the national shame that engulfed the country when a team packed with NHL superstars crashed out of the men's ice hockey to Finland at the quarter-final stage has been lessened by Russia topping the medal table with 13 golds and 33 medals overall.

That double achievement - most golds and most medals overall - is the first for a host country since Norway did it in Oslo in 1952 and provided the fairytale ending so many in the country craved.

After the nadir of the Vancouver Games - when Russia won just three golds - the country is back on the international winter-sport stage, and the nation loved every moment of its return.

Mentions of protest haven't gone down too well either with Russia's authorities.

Given the level of concern over Russia's anti-'gay propaganda' laws, many had expected these Olympics to be dominated by the spectacle of competitors speaking out.

But on the Olympic Park, athletes remained largely silent, preferring to concentrate on their events.

Canadian snowboarder Michael Lambert offered a sole voice of dissent, using his pre-competition media conference to rage against the environmental standards he had witnessed and what he perceived as the suppression of freedom of speech by President Putin and his government.

The sight of John Carlos and Tommie Smith raising a clenched fist to the night sky at the Mexico Olympics in 1968, a potent act of support for black America and the struggle for civil rights, seemingly belongs to a different era.

With the IOC constantly reminding athletes of their responsibilities under Rule 50 of the IOC Charter, which outlaws political statements or propaganda in competition, the Sochi Games confirmed that political activism within sport truly is on life support.

Away from the Park, the arrival of the punk protest group Pussy Riot in Sochi made a major impact.

The sight of five ski-mask-clad women running down the steps of a Sochi police station singing "Putin will teach you to love the motherland" was not in the script for these Games.

Neither was the sight of the group being whipped and pepper sprayed by local security forces the following day. The incident was described as "unsettling" by an IOC spokesman and the regional governor later apologised.

But the image of Russia's violent response to peaceful protest will do little to assuage the concerns of many that the country remains intolerant to those who disagree with government policy.

A protest area in the nearby Khost neighbourhood remained deserted, with a byzantine process for gaining permission from the local authority to demonstrate cited as one reason why it remained empty.

Finally Billie-Jean King, the former tennis great who came to Sochi as a member of President Obama's official delegation, called for the IOC to consider gay rights when picking future Olympic hosts.

But without a groundswell of support for change from athletes and IOC members, the status quo is destined to prevail.

Russia conducted the biggest security operation in Olympic history for these Games.

Fears that Sochi would be targeted were raised after two suicide bombers killed 34 people in Volgograd on consecutive days in late December.

Russia's response to the threat level it faced was overwhelming, with a flotilla of naval vessels in the Black Sea, around 50,000 police and security personnel on the ground, the interception of data and emails, and surface to air missiles deployed in strategic positions.

But is that any different to what visitors to London 2012 experienced?

There, with G4S unable to supply enough security guards, the British military ended up working at the security checkpoints.

Asked about the level of security, IOC president Thomas Bach said: "Every big event nowadays is under threat, whether it's a political summit or a big convention.

"We have to address this because anything else would be surrender to terrorists and this is the last thing we all want to do."

An American family of four from Kansas told me they felt security in Sochi was "everywhere and nowhere".

That accurately describes how Russia put a huge effort into securing the land, sea and airspace around the Olympic venues, while the spectator experience of watching the competition remained, for the most part, the same as that experienced at other major events.

Ultimately, Russia will be relieved that it prevented an attack without turning the Olympics into a military exercise.

Given a reported cost of £31bn, perhaps that was the minimum the IOC and the Russian public could expect.

To achieve this, snow was made in huge amounts, hotels, roads and railways were built, stadiums created and volunteers bussed in to make the whole thing run smoothly.

But the Olympic Park lacked the finishing touches and landscaping of London 2012 or the metropolitan city vibe of Vancouver 2010. Sochi was effectively built from scratch.

This was, however, an Olympics designed principally to reach out and impress the billions watching worldwide. The venues that have been built are spectacular - the thousands of lights on the sweeping lines of the Bolshoy Ice Arena roof have provided a sensational backdrop for the 300 broadcasters here.

With the Fisht stadium destined to be used as a venue for the 2018 Fifa World Cup, F1 races and the arrival of world leaders for the next G8 summit in June, Sochi's organisers are confident there will be no white elephants.

The long-term plan is to turn Sochi into a year-round destination - a snow-and-ice paradise in winter and a Cote d'Azur-style destination for tourists in the summer.

The subtropical climate - which saw record high temperatures for a Winter Games - can only help these ambitions, even if the sight of people walking around in shirt-sleeves in the middle of February seems a little odd at first.

Sochi also provides Russian athletes with access to first-class winter sports training venues, resolving a situation that arose when existing facilities were subsumed by breakaway republics after the Soviet Union was dissolved in 1991.

With the Olympic flame now extinguished (it will be re-lit for the Paralympic Games next month), Russia can reflect on a job well done.

Challenges remain though, and the country's critics now hope that the long-term effect of staging these Games will be a reflection from government and citizen alike on how they want to shape their future.